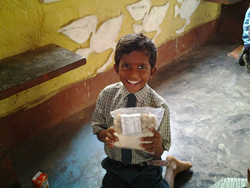 Stop Hunger Now, an international non-governmental organization (NGO), today announces the opening of its first permanent facility in Bangalore, India. To celebrate the launch, 150 employee volunteers from Broadcom Corporation and SanDisk Corporation will package 45,000 highly nutritious dehydrated meals comprised of rice, soy or dal, vegetables and 23 essential vitamins and minerals to distribute to children and families in need throughout India. The event, sponsored by Broadcom and SanDisk, is located at Broadcom's Bangalore Campus at Campus 1A, 5th Floor, RMZ Ecospace, Bellandur, Bangalore – 560 038.

“A nutritious meal given on a regular basis can make all the difference in the life of a child,” said Rod Brooks, President and CEO of Stop Hunger Now. “Our meals are typically served to children in schools to provide the nutrition that children need to learn, which leads to better health, attendance and performance in school. Education is a pathway out of poverty. By establishing our meal packaging program in India, local volunteers can use locally sourced ingredients to support the local economy and give children access to a more secure future through local distribution of the meals."

"What makes Stop Hunger Now such a great partner is that this NGO gives companies like ours the opportunity to enlist its employees as agents for good in their community," said Paula Golden, President and Executive Director of the Broadcom Foundation and Director of Broadcom Community Affairs at Broadcom Corporation. "Because Broadcom employees volunteer at local Bangalore schools, we are gratified that Stop Hunger Now works closely with schools as one of their major points of distribution with their partner NGOs. This program will have a vital impact throughout India, and Broadcom is proud to support the first facility in Bangalore."

Since 2013 Stop Hunger Now has packaged and distributed more than 320,000 meals to children and families in Bangalore, New Delhi and Kashmir, but the cost of the program was high without an in-country facility and director. With a facility and permanent staff in Bangalore, Stop Hunger Now will be able to package millions of meals to benefit local feeding programs in schools, orphanages, medical clinics, and vocational training programs throughout India.

“Our global partnership with Stop Hunger Now has been fully embraced by our employees worldwide as an effective and meaningful way to be directly engaged in the effort to eliminate hunger in our lifetime,” said Gisela Bushey, Director, SanDisk Foundation and Community Relations. “We are delighted to be part of Stop Hunger Now opening their first facility in India. We hope our continued partnership with them will encourage other companies to join SanDisk and our colleagues at Broadcom and Rotary Bangalore IT to achieve the goal of no child going to bed hungry.”

Dola Mohapatra has been hired as Executive Director for Stop Hunger Now India. Once operations begin, the new Stop Hunger Now affiliate meal packaging program should become 100 percent sustainable within 12-18 months. The ongoing costs are covered by the per-meal donations raised by the volunteer organizations who package the meals.

Stop Hunger Now India joins an international program with meal packaging locations in 20 cities throughout the U.S. and international locations in South Africa, Malaysia, Italy and the Philippines. Another new affiliate is scheduled to open in Peru in 2015. More than 450,000 volunteers from corporations, religious communities, schools and civic organizations have packaged Stop Hunger Now meals.