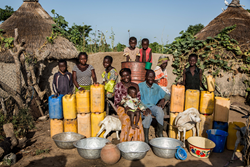 A family in Nabitenga, Burkina Faso in West Africa with water containers amounting to 400 liters, their daily water consumption during the dry season for drinking, cooking, bathing and livestock.

WaterAid’s work in West Africa focuses on areas where the availability of water is increasingly unpredictable, where people are suffering the most from disease and where there are exceptionally high levels of poverty.

The programs cover three years and the investment will cover two areas. The first will focus on fixing water points in disrepair, addressing water quality issues, improving the skills of local people to maintain water points and ensuring safe water supplies for the long-term. The second focuses on ensuring health facilities in trachoma-endemic parts of Mali are equipped with basic water supplies.

These parts of West Africa have an extremely dry climate, meaning access to water is limited, rains are irregular and droughts are common. Those with access to water may find their water point stops working.

When people fall ill, the health facilities near their homes often lack access to basic water supplies. The current Ebola epidemic in West Africa has highlighted the hidden crisis faced by health workers and patients in the developing world and the urgency to address the lack of available clean water in health care facilities.

Sarina Prabasi, CEO of WaterAid America, said: “WaterAid’s work in West Africa focuses on areas where the availability of water is increasingly unpredictable, where people are suffering the most from disease and where there are exceptionally high levels of poverty."

"WaterAid is proud to work with the Hilton Foundation on this new initiative. We are excited about the impact this work will have on some of the world’s most marginalized people through health centers, schools and poor communities. These people are often the last to receive water services: namely women and children, elderly people, those living with HIV/AIDs or disabilities and those with sight problems such as trachoma, caused by poor hygiene and sanitation.”

These investments will see the rehabilitation of more than 250 non-functioning water points. Local people will be trained to use technologies such as GPS and cellphones, tools that can be used by largely illiterate communities, to monitor groundwater levels and maintain year-round water availability. In Mali, WaterAid will reach over 66,000 patients and staff at health care facilities with clean water for hand-washing and drinking.

“We look forward to working with WaterAid on this innovative and sustainable clean water program in West Africa,” said Steven M. Hilton, Chairman, President and CEO of the Conrad N. Hilton Foundation. “Our partnership will reach some of the most vulnerable people in the world, working with local communities to create long-term technological solutions for safe, clean drinking water.”

About the Conrad N. Hilton Foundation

The Conrad N. Hilton Foundation was created in 1944 by international business pioneer Conrad N. Hilton, who founded Hilton Hotels and left his fortune to help the world's disadvantaged and vulnerable people. The Foundation currently conducts strategic initiatives in six priority areas: providing safe water, ending chronic homelessness, preventing substance abuse, helping children affected by HIV and AIDS, supporting transition-age youth in foster care, and extending Conrad Hilton's support for the work of Catholic Sisters. In addition, following selection by an independent international jury, the Foundation annually awards the $1.5 million Conrad N. Hilton Humanitarian Prize to a nonprofit organization doing extraordinary work to reduce human suffering. From its inception, the Foundation has awarded more than $1 billion in grants, distributing $92 million in the U.S. and around the world in 2013. The Foundation's current assets are approximately $2.4 billion. For more information, please visit HiltonFoundation.org.

WaterAid is the world’s largest international non-profit organization solely dedicated to helping the world’s poorest people gain access to safe water, toilets and hygiene education. WaterAid works in 26 countries across Africa, Asia, Central America and the Pacific region. Since 1981, WaterAid has reached 21 million people with safe water and, since 2004, 18 million people with toilets and sanitation.