A staggering 8.6m London-based TV viewers have had chance to watch a prime-time programme dedicated to the Khojaly victims on the London Live channel. The report featured the Khojaly Commemoration Concert and an art installation project, organised by The European Azerbaijan Society under the auspices of the Justice for Khojaly campaign. 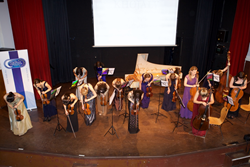 This concert commemorates a very sad event that has come to symbolise all those who were lost in that war.

On 1 March, a half-hour television programme showcasing the annual Khojaly Commemoration Concert – organised by The European Azerbaijan Society, under the auspices of the international Justice for Khojaly campaign – was screened to an audience of 8.6 million London-based viewers of London Live television. The programme commemorated the victims of the Khojaly Massacre – the single worst atrocity of the unresolved Armenian–Azerbaijani conflict over Nagorno-Karabakh. The concert also received coverage in the London market-leading Evening Standard newspaper, which has an estimated daily circulation of 900,000.

In her introduction to the concert, which took place at St. John’s, Smith Square, on 24 February, London Live presenter Claudia-Liza Armah said, “Tonight is all about commemorating the 23rd anniversary of the 613 people who died in the Azerbaijani town of Khojaly.”

Lionel Zetter, Director, TEAS, outlined, “These concerts are bittersweet – sweet because the music is beautiful and haunting – and bitter, because we are here to remember 613 men, women and children who sadly died 23 years ago. This concert commemorates a very sad event that has come to symbolise all those who were lost in that war.”

The programme also contained footage of the art installation project at the Chelsea College of Arts, organised earlier on 24 February, which comprised 613 red T-shirts laid out on panels to form a maze. Christopher Pincher MP, Chair, Azerbaijan All-Party Parliamentary Group (APPG), explained, “Today is a moment for reflection on the 613 people who lost their lives in Khojaly. We should remember and reflect upon what happened to them.” He is then seen releasing a balloon carrying the names of all the Khojaly victims into the London sky.

One of the highlights of the programme was the UK premiere of an emotionally-charged new work commemorating the Khojaly victims by French composer Pierre Thilloy entitled 'Lamento – In Memoriam', featuring a duet by Azerbaijani violinists Sabina Rakcheyeva and Nazrin Rashidova set against the throbbing strings of the London-based FeMusa Orchestra. Another highlight was Carnation by Azerbaijani composer Vagif Adigezalov, which included the evocative sound of the Azerbaijani tar, played by Arslan Novrasli. This instrument was developed in the Azerbaijani region of Karabakh, which remains under illegal Armenian occupation.

Nazrin Rashidova concluded, “Music is the highest form of art, generating a great emotional response from audiences, and can take them to a different world. This is particularly the case with Azerbaijani classical works that are rarely performed in the UK.”