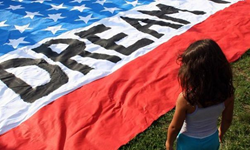 Anne Frank was among the millions of victims of religious and ethnic persecution at the hands of the Nazis. In 1938, her father, Otto Frank, tried unsuccessfully to emigrate with the family to the United States. Even with the support of prominent American businessman, Nathan Straus, without the necessary entry papers the Franks were unable to gain passage. For the refugees who escaped Nazi Germany, America naturally represented a beacon of hope for a better world and a new beginning. But a drastic tightening of U.S. immigration policy, based partly on fears that some immigrants might be spies or saboteurs, meant that transit visas, and safe passage through Europe to the United States became increasingly impossible to obtain.

The Franks’ immigration story did not end there. On December 1, 1941, the Cuban government issued a single visa in the name of Otto Frank. Ten days later on December 11, Germany declared war on the United States and the Cuban visa was cancelled. Otto Frank survived the war, but his family did not.

With this history in mind, The Anne Frank Center USA will host its next "Confronting Intolerance Today" program at the Koubek Center in Miami, a city rich with immigrant history and culture. This important and timely event will examine discrimination on the basis of nationality and citizenship, specifically addressing immigration reform and the dream of a new world with new possibilities.

The event will feature Felipe Sousa-Rodriguez, Deputy-Managing Director of United We Dream, who recently walked on the Trail of Dreams to draw attention to the need for the DREAM Act and to push for an end to deportations; Isabel Vinent Grimany, Deputy Director of the Florida Immigrant Coalition, who has worked for nearly 30 years with grassroots organizations (youth, indigenous, immigrant, women, rural) in the US and Central America; and Marleine Bastien, Executive Director Fanm Ayisyen Nan Miyami (Haitian Women of Miami), who was recently named a “Woman of the Year” by Ms. Magazine.

In conjunction with the panel, The Anne Frank Center USA - in partnership with the Dutch Consulate in Miami - will also open its definitive exhibit "Anne Frank: A History for Today" at locations in Miami. Designed to educate visitors of all ages about the dangerous consequences of intolerance, the exhibit uses the story of Anne Frank to urge communities to work together to create a society based on mutual respect.

The exhibit venues are:

THE PANEL AND EXHIBITS ARE FREE AND OPEN TO THE PUBLIC
For the panel, RSVP to mia-rsvp(at)minbuza(dot)nl

The Anne Frank Center launched its "Confronting Intolerance Today" speaker series in conjunction with "The Sapling Project," a national initiative aimed at bringing together diverse communities and educational centers in a shared celebration of Anne, her appreciation of nature, and her longing for freedom and justice in the world. "Confronting Intolerance Today" events showcase innovative approaches to combating intolerance here in the United States and the Netherlands. For more information, please visit http://www.annefranktreeusa.com