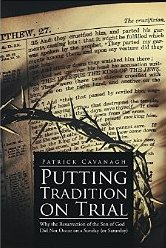 Many people base their religious beliefs solely on faith, failing to ever check the facts.

The Bible says to let your faith be bigger than your fear, but what if our faith is leading us astray?

In his new book “Putting Tradition on Trial,” author Patrick Cavanagh comparatively studies three commonly used biblical doctrines that all claim to be an accurate translation of the ancient Greek texts. He sets out on an endeavor to identify if, where and why there are inaccuracies and whether or not it is possible to rectify them.

“It was obvious that at least two of these doctrines must have been incorrect,” Cavanagh said. “Many people base their religious beliefs solely on faith, failing to ever check the facts.”

Using ancient Greek texts, history and astronomy as the basis of Cavanagh’s study, “Putting Tradition on Trial” reveals that generations of expert theologians have been mistaken about certain religious facts and dates, including the days of the birth, crucifixion and resurrection of Jesus Christ.

“The results of these studies were so clear and compelling that I feel I have an obligation to present the findings to as wide an audience as possible,” Cavanagh said.

About the author
Patrick Cavanagh is retired and currently resides in Auckland, New Zealand. He found inspiration for his writing by examining historical information as well as reliable astronomical calculations through the United States Naval Observatory.