Morehouse College Men Now Have a Distinguished, Luxury-Hand-Assembled Watch to Match Their Mystique

Hodges Watch Company (HWCo) donated a new watch, from the limited edition Morehouse College collection of timepieces, at the Morehouse College Candle-in-The-Dark Gala to be auctioned off for the benefit of the school's general scholarship fund. 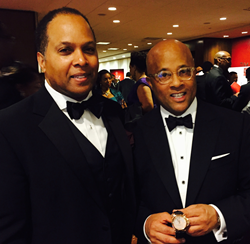 I wanted to design and manufacture a collectable timepiece that could be passed down for generation to generation of Morehouse Men.

Howie Hodges, class of ‘82 at Morehouse College, took his commitment to “The House” seriously when he created a trademarked design for a signature watch to be exclusively worn by the formidable Morehouse Man.

Hodges Watch Company (HWCo) donated one of the "luxury hand-assembled" watches to the college to be auctioned at the 2015 Annual Candle-in-the-Dark Gala that was recently held in Atlanta, GA. The silent auction winner was Morehouse Alumnus Gregory T. Burrell, class of '90, a prominent businessman from Philadelphia where he is president & CEO of the Terry Funeral Home.

The HWCo watches are an élite and limited Morehouse College collection where only 350 will be offered for sale. Morehouse gets a percentage of all sales through an approved licensing arrangement.

Watches are custom-made-to-order with a remarkable layered dial of iconic "Graves Hall" crafted from sterling silver, over iridescent mother-of-pearl. All movements are SWISS made and imported by HWCo.

Hodges, says, “I have a passion for watches, and I wanted to design and manufacture a “collectable timepiece” that could be passed down from generation-to-generation of Morehouse men and to help my Alma Mater and have fun doing so. And, to remind me of the momentous years I spent on campus.”

For more detail about the various styles of watches in the Morehouse Collection, one can visit the website at http://www.hodgeswatch.com or contact Hodges at the hodgeswatch(at)gmail(dot)com.

About Hodges: HWCo Founder C. Howie Hodges II is a second generation Morehouse™ Man from the Class of 1982 and is the son of the late Clemmon H. Hodges, Class of 1951. He’s married to his college sweetheart Elizabeth “Beth” Jackson Hodges, the eldest daughter of distinguished Morehouse Alumnus, the late Maynard H. Jackson, Jr., Class of 1956.