A recent study by PsychTests.com indicates that top performing employees show ambition, persistence, and a consistent desire to better themselves. 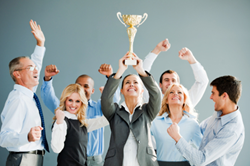 "Determining whether you have a future Mount Everest climber on your hands or an underachiever is a matter of asking the right interview questions."

What do Mark Cuban, J.K. Rowling, Jim Carrey, and Oprah have in common? They knew that they were destined for greatness and were driven to make something of themselves, no matter how much hard work it required or how many obstacles obstructed their path. Ambitious people not only challenge the status quo, but as research from PsychTests’ Ambition Test reveals, job candidates with strong aspirations are more likely to become the top performers in a company.

It is a standard (i.e. clichéd) question that most interviewers ask:

“Where do you see yourself five years from now?”

And most job candidates will respond with a perfect yet equally clichéd answer, like:

“In a position, here, with more responsibility, because I enjoy learning and love challenges.”

Ask a useless question and you will get a useless answer, but inquiring about a person’s aspirations has merit. In fact, research conducted by PsychTests indicates that the degree to which an employee is ambitious has a significant impact on his or her performance

When they compared below average, average, and top performers, PsychTests study reveals that:

“While it may seem that these top performers can walk on water, one particularly enlightening statistic from our study reveals that these ambitious go-getters are not immune to self-doubt,” explains Dr. Jerabek, president of PsychTests. “In fact, 35% of top performers indicated that they get discouraged when faced with obstacles to their goals. However, what differentiates them from average and below average performers is their persistence and refusal to allow these obstacles to turn into permanent roadblocks. Determining whether you have a future Mount Everest climber on your hands or an underachiever is a matter of asking the right interview questions – and avoiding the standard ones that most job candidates can answer on cue.”

In order to dig for information on a job candidate’s level of ambition, researchers at PsychTests suggest asking the following interview questions:

“Describe a goal you achieved that no one else believed you could. Why didn't they believe in you, and what made you want to keep trying?”

“What does failure mean to you? How would you define success?”

“In the past two years, how have you upgraded your work skills and abilities? Tell me about any classes, extra reading, or training you have taken part in.”

“What is the most disappointing feedback you received in a performance review? What changes did you make as a result?”

“What type of initiative have you taken in previous jobs? Have you ever approached a manager with a new idea or task that you wanted to work on?”

Want to assess your level of ambition? Go to http://testyourself.psychtests.com/testid/3294

Professional users of this assessment (therapists, life coaches and counselors) can request a free demo of the Ambition Test or any other assessments from ARCH Profile’s extensive battery: http://hrtests.archprofile.com/testdrive_gen_1

Superstar employees don't settle for "Satisfactory." They strive to do and be more.Job candidates with strong aspirations are more likely to become the top performers in a company.