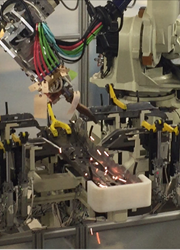 Using their standardized methods for project execution challenged us to examine our methods and procedures and see things from a different perspective.

Turner Machine, a custom machine builder and machine shop, recently completed multiple projects for car manufacturing giant Toyota. As one of only three domestic manufacturers selected for the projects, Turner Machine designed and manufactured seven machines that will be used as part of the fender assembly process in three Toyota plants in San Antonio, Texas; Baja, California; and Georgetown, Kentucky.

“Working with Toyota has been a great learning experience for the Turner team,” said Jonathan O’Neal, senior project manager at Turner Machine. “Using their standardized methods for project execution challenged us to examine our methods and procedures and see things from a different perspective. It’s a great example of how a small company can benefit from working with a large one, which goes beyond money.”

Because communication with Toyota was complicated at times due to multiple departments and chain of command, Turner Machine learned to be more proactive on the front-end of the process to reduce the likelihood of issues on the back-end. This not only saved time, but also money, since it is more expensive to make changes late in a project’s lifecycle.

Along similar lines, Turner Machine is also putting in place a new project specification system, similar to Toyota’s, in which clients will now supply the company with extremely detailed specifications and timing requirements at the onset of each project. Doing so will prevent loss of time, money and materials.

Among the feedback from Toyota, Turner Machine was praised for its facilities and in-house capabilities, as well as its hospitality and willingness to react swiftly to any issues that arose during the final stages of the projects.