During a recent visit to their clinics, Saving Moses staff employed the art of photography to reach out to the mother's and their babies in a nation the The New York Times recently ranked as, “the deadliest country for kids." 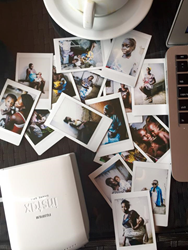 Saving Moses is a global humanitarian organization committed to providing help where it is most needed but least available. As one of their staple programs, Saving Moses supplies therapeutic milk to six clinics in the Benguela province of Angola to treat babies and toddlers suffering from severe malnutrition. During a recent visit to their clinics, staff employed the art of photography to reach out to the mothers and their babies in a nation the The New York Times recently ranked as, “the deadliest country for kids." (http://www.nytimes.com/2015/03/19/opinion/nicholas-kristof-deadliest-country-for-kids.html?ref=opinion&_r=0)

The organization sent five individuals to Angola in March. The team consisted of Saving Moses leadership, videographers, and photographers. While visiting the clinics, the team took portrait photos of mothers and their babies. These mothers were staying at the clinics while their babies received treatment. All of the babies featured in the portraits were suffering from severe malnutrition. The goal of the photos was to display the women and their babies with beauty, dignity, and grace, rather than destitution.

On the last day of their trip, Saving Moses staff handed out printouts of some of the pictures to the mothers. Many of the women chuckled as they looked at their photo. Several showed signs of surprise after looking at their representation on paper.

These portraits will be used to represent the work Saving Moses does in that nation. The organization visits Angola annually to check on operations, gather stories, and engage with mothers and their babies.

Saving Moses: Saving Moses has concentrated their efforts on providing for babies and toddlers ages five and under around the world, where the need is most urgent and the care least available. Saving Moses was founded in 2012 by Sarah Bowling after a mission trip to Ethiopia. They have established ongoing programs such as their revolutionary NightCare® Centers in Cambodia, offering shelter and protection for babies and toddlers whose mother’s are entangled in the sex trade industry. They also fund six malnutrition clinics in Angola which provide therapeutic milk to little ones who are critically ill. They expanded their programs into Afghanistan in 2015. For more information, please visit http://www.savingmoses.org, call 303.729.1200, or email Info(at)savingmoses(dot)org.