America Media, Ignatian Solidarity Network, and the Jesuit Conference of Canada and the United States Collaborate on 18-Minute Documentary 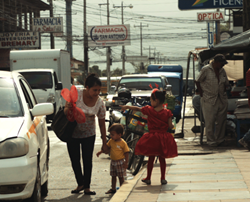 La Voz Del Pueblo, an 18-minute documentary exploring violence and injustice in Honduras through the perspective of journalists at a Jesuit-run radio station, will be released on Tuesday, Mar. 24, 2015. The release will coincide with the thirty-fifth anniversary of Archbishop Oscar Romero’s murder in neighboring El Salvador. Directed by Fr. Jeremy Zipple, S.J., executive editor of America Films, the release is a collaborative effort of America Media, Ignatian Solidarity Network, and the Jesuit Conference of Canada and the United States.

The La Voz Del Pueblo documentary, as well as an educational resource guide will be released at noon Eastern time on Tuesday, March 24, 2015 at http://ignatiansolidarity.net.

The timing of the release to coincide with the anniversary of Archbishop Romero’s murder was intended to call attention to the urgent humanitarian crisis in Central America’s Northern Triangle today, said Fr. Bill Kelley, S.J., Secretary for Social and International Ministries at the Jesuit Conference in Washington.

“Our brother Jesuits and their lay colleagues at Radio Progreso and ERIC keep alive the legacy of Archbishop Romero’s prophetic voice for human rights in the region. They continue their efforts to call attention to the violence and impunity that haunts Honduras despite threats to their physical safety, much as Archbishop Romero’s witness placed him in the crossfire 35 years ago,” noted Fr. Kelley.

Romero, initially seen as a conservative who would maintain the status quo when named bishop of the Archdiocese of San Salvador in 1977, became one of the most well-recognized critics of government-sponsored oppression during El Salvador’s 12-year civil war. He was known for reading the names of innocent civilians killed during his weekly homilies. Recently the Vatican verified his status as a martyr of the Church and announced his impending beatification, which will take place on May 23 in San Salvador.

Honduras, just a 2.5 hour flight from Houston, Texas, had the highest homicide rate in world in 2014. From 2005 to 2012, murders of women and girls increased 346%. Murders of men and boys increased by 292% over the same time period. In addition to violence, Honduras is plagued by crippling poverty and inequality. Thirty percent of Hondurans are living on less than $2 a day, and in rural areas 6 out of 10 households live in extreme poverty.

Founded in 1540 by Saint Ignatius Loyola, the Society of Jesus (Jesuits) is the largest order of priests and brothers in the Roman Catholic Church. Jesuit priests and brothers are involved in educational, pastoral and spiritual ministries around the world, practicing a faith that promotes justice. In Canada and the United States, there are 30 Jesuit colleges and 81 pre-secondary and secondary schools with a shared goal of developing competent, compassionate and committed leaders in the service of the Church and society. Jesuits minister in parishes and at retreat houses and serve as chaplains at prisons, hospitals, nursing homes and in the military. In Canada and the U.S., the Jesuits are represented by the Jesuit Conference of Canada and the United States, headquartered in Washington, D.C. For more information on the Society of Jesus, visit http://www.jesuits.org.