On April 28th, Attorney General Bill Schuette will be the keynote speaker at “Not in My Backyard: Conquering Human Trafficking in Michigan” a public awareness event being sponsored by the Metro Detroit Chapter of the US National Committee for UN Women. 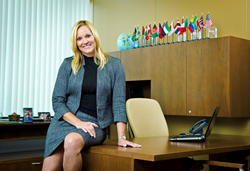 “Victims of human trafficking are in bondage through force, fraud or coercion, for the purpose of sex or labor exploitation,” said Bill Schuette.

“Not in My Backyard: Conquering Human Trafficking in Michigan” is being held on Tuesday, April 28th at 11:00 AM at Walsh College in Troy, for the purpose of alerting the community about the acceleration of a serious crime that is impacting communities throughout the state.

As Attorney General, Schuette has lead the fight against this horrific crime by prosecuting the state's first-ever criminal cases under the state law banning human trafficking in Michigan. “Around the country, and right here in Michigan, men, women and children are forced into prostitution, domestic servitude and other labor for little or no pay,” states Schuette.  “Human trafficking is a modern-day form of slavery and it is the second-largest and fastest-growing criminal industry in the world.”

“Victims of human trafficking are in bondage through force, fraud or coercion, for the purpose of sex or labor exploitation,” Schuette explains further. “Our children are especially at risk - THE BUREAU OF JUSTICE STATISTICS Found that 40% of human trafficking cases involve the sexual exploitation of a child.  As the Attorney General, it is my obligation to guarantee that neither slavery nor involuntary servitude shall exist.”

Lori Blaker, President of the Metro Detroit Chapter of the US National Committee for UN Women and CEO/President of TTi Global, acknowledges Schuette’s contributions when saying, “Attorney General Schuette has worked to establish a special unit to prosecute human traffickers and has worked aggressively with law enforcement task forces to ferret out modern day slavers and to put an end to their trade in human beings, especially child victims. He has also conducted trainings for law enforcement and prosecutors, and works with community advocates to raise awareness of this crime. We think it is important that the public knows what is happening.”

Moderating the event will be Paul W. Smith of WJR 760am. The distinguished list of panelists includes; Jane White, Executive Director of the State of Michigan Human Trafficking Task Force, Dan Tewilliager, Special Agent in Charge, Homeland Security, Theresa Flores, Survivor/Founder of S.O.A.P. and author of “The Slave Across the Street” and Edee Franklin, Founder and Executive Director of Sanctum House, a shelter for victims.

The event is open to the public. Tickets are $25 for adults, $10 for college students and free to students 18 and under. Space is limited. Please reserve in advance. This event is being sponsored in part by Baker Tilley, TTi Global, The Detroit Press Club, Plus One Meetings, and Prain Development. http:// Tickets can be purchased by calling 248-417-6725 or on-line at: http://www.brownpapertickets.com/event/1376005

The group hosts various events throughout the year and advocates for global women’s issues and UN Women in communities around the country. The group also works to support legislation on global women’s issues, especially on leadership, economic participation and ending violence against women.

Members and supporters are men, women, and children in cities around the country who give their time and resources to support a world where women of all ages have access to education and employment opportunities, and sustainable livelihoods that enable them to live free of gender-based violence.