Seminary students gain new appreciation for civil rights struggles of the past and progress that continues to be made in the present. 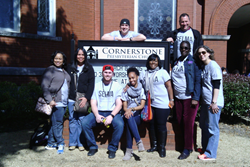 United Theological Seminary students and staff in Selma, Ala.

Nine United Theological Seminary staff and students traveled with the Wesley Foundation in Cincinnati, Inc. and others from the Greater Cincinnati area to participate in the commemoration of the 50th anniversary of the march across the Edmund Pettus Bridge in Selma, Alabama. The events of March 7, 1965, became known as “Bloody Sunday,” due to the violent response of local police and state troopers to the peaceful protest for voting rights.

Before arriving in Selma, Alabama, the group of approximately 80 people stopped in Birmingham, Alabama, to visit other sites of historical significance in the Civil Rights Movement of the 1950s and 1960s. Bridget Weatherspoon, Recruiter and Assistant to Doctoral Studies at United, said that it seemed many students did not have a complete understanding of the history of the Civil Rights Movement. That changed as they saw firsthand the locations where important and sobering events had taken place.

The mood among the group became increasingly somber as they moved from Bethel Baptist Church, which served as headquarters for the Alabama Christian Movement for Human Rights from 1956 to 1961, to the Sixteenth Street Baptist Church, where four girls were killed in a 1963 bombing, and finally to the Birmingham Civil Rights Institute. The group ended their time in Birmingham, Alabama, with a special viewing of the movie “Selma.”

When they reached the Edmund Pettus Bridge in Selma, Alabama, the group had a greater appreciation for the significance of the march—both in 1965 and 2015.

“I think the march was a life-altering experience for everyone that was a part of our group,” said Weatherspoon.

Several members of the group expressed a renewed sense for pursuing social justice in the present day.

“We need to be intentional in making the community aware that it’s not going to take just one race, it’s going to take all races coming together, to make a difference,” said Weatherspoon.

United Theological Seminary is a graduate professional school of The United Methodist Church offering masters and doctoral theological degrees and continuing education with programs offered on campus and online. United's goal is to educate dynamic, Spirit-led leaders who will renew the church for the mission of Jesus Christ in the world.