Faith leaders gathered this morning in Parliament’s Charles Lynch Room for a press conference, calling on the Canadian government to protect freedom of religion and conscience in Canada. Participating organizations include One Free World International, Institute for Canadian Values, Association for Reformed Political Action Canada, Bill Prankard Evangelistic Association and MY Canada Association. 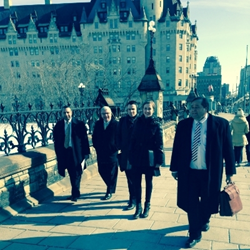 ...over the past several years there is a growing intolerance and outright discrimination to those who still live and practice Judeo-Christian life-styles...

"I myself have been a victim of bullying in my high school because of my Christian faith and have sat in classes where it is mocked at university,” said Lia Milousis from the MY Canada Association. “This type of persecution is wrong and alarming. If this...continues Canada will become a nation far removed from the values that have made it great."

Bill Prankard, President of Bill Prankard Evangelistic Association, made it clear that religious freedom is on the decline in Canada. Said Prankard: “...over the past several years there is a growing intolerance and outright discrimination to those who still live and practice Judeo-Christian life-styles...While other groups are being granted more and more rights we have been loosing our rights.”

Charles McVety with the Institute for Canadian Values expressed concerns that religious freedom is not just under attack from public institutions, but by private ones as well: "Major corporations such as the Bank of Montreal are overtly undermining [freedom of religion] by attacking a Christian University's accreditation and requiring companies to query their employees as to their sexual practices and submit the information to the corporation for consideration of business."

Andre Schutten, legal counsel with the Association for Reformed Political Action (ARPA) Canada, told reporters that he sees religious freedom being stripped at all levels: “As a Christian lawyer heavily involved in religious freedom issues in Canada, I can say that across this country at the regulatory, municipal, provincial and federal level, laws and regulations continue to be passed that restrict or curtail the religious freedom of Canadians.”

One Free World International founder, Majed El Shafie, knows something about being persecuted for your faith. The Egyptian-born human rights leader told those gathered, “I was imprisoned and tortured in Egypt for my Christian beliefs, and I was given a chance at freedom when I came to Canada years ago. I don’t want that freedom taken away from me.”