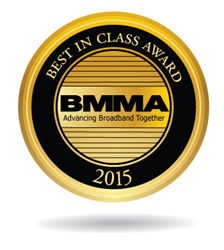 Each year, the BMMA recognizes teams and companies that demonstrate innovation or excellence in marketing broadband services.

“Each year, the BMMA recognizes teams and companies that demonstrate innovation or excellence in marketing broadband services,’’ said Ellis Hill, President of ResearchFirst, Inc., the BMMA’s management firm. This year’s awards went to two service providers, GVTC Communications and TDS Telecom, and one vendor company, Calix, all of which executed best in class marketing practices related to broadband products and services."

In June 2014, GVTC Communications aligned with the cities of Boerne, Bulverde and Gonzales, TX, to form the GVTC GigaRegion® and drive economic development throughout GVTC’s service area. GVTC and these three communities partnered to create awareness of 1 Gbps Internet speeds within their rural areas and to market the area as a premier destination to reside and establish or expand a business.

The GVTC GigaRegion® includes a 2,000-square-mile region covering areas of North San Antonio, the Texas Hill Country and South Central Texas. With the help of the partnership, GVTC is now the first rural telecommunications provider in Texas to power more than 2,200 miles of fiber optic cable. Throughout the GVTC GigaRegion®, more than 39,000 rooftops, or more than two-thirds of all GVTC customers, have access to a 1 Gbps Internet through GVTC’s fiber network.

To help aid the partners in their efforts to market the economic development opportunities presented with this enhanced service availability, GVTC developed a comprehensive marketing program, which included marketing, advertising and communications elements to promote the business and lifestyle benefits of the GVTC GigaRegion®. The marketing efforts were kicked off by conducting a workshop for all key stakeholders to introduce them to the marketing program and align the partners in their marketing efforts for the region as a whole.

TDS Telecom and Calix partnered together on a public relations campaign for the first gigabit network launch in the state of New Hampshire: TDS 1Gig. Working together, the companies reached out to industry analysts, local and state politicians, and media to gain coverage for the 1Gig launch in May 2014.

The media and analyst outreach by Calix and TDS, teamed with TDS’ targeted marketing campaign, helped capture the market and media's attention. TDS received a high volume of news coverage, locally, statewide and nationally and generated a number of follow-up interviews resulting in additional coverage.

The release and announcement cast a wider net than if TDS or Calix would have done the announcement alone. Both companies were seen as offering leading-edge solutions to the industry and their customers: Calix for the equipment that allows providers to offer a gigabit to subscribers and TDS for offering the first gigabit network in New Hampshire and subsequently rolling it out in other communities nationwide.

As both companies utilized their media contacts across multiple outlets, each benefited from additional press coverage outside of their normal scope. The extended coverage helped increase both companies’ standing as experts in gigabit deployments.