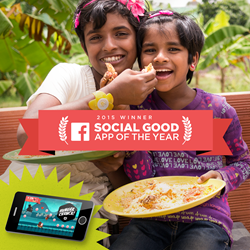 Hunger Crunch (http://www.hungercrunch.com), a newly launched video game, has won Facebook’s Social Good App of The Year award which was presented at the F8 Facebook Developer Conference in San Francisco. The conference was held at the Fort Mason Center on Wednesday, March 25th and Thursday, March 26th, and brought together the leading developers from around the world for discussions, demos and discovery of innovative app technology. The award was presented on March 26th.

Hunger Crunch, created and developed by Rice Bowls, a non-profit based in Greenville/Spartanburg, South Carolina, focuses on raising money to feed orphaned children in 54 orphanages in eight countries around the world. The one-touch side-scrolling platformer follows the gamer, who is mounted on a mythical beast called “Beasty,” as they aim to rid the world of hunger and its maddening army of minions. Fun, fast-moving and graphically sophisticated, Hunger Crunch is a whimsical ride through a fantasy kingdom with real world humanitarian benefits. Additionally, a built-in feature makes it easy for groups to host tournaments and compete against each other to raise money, fighting hunger in the game and in the real world too.

There are 12 levels with a unique stomp mechanic that allows the gamer to chain-jump and squash enemy monsters, thereby stomping out hunger. The player collects candy coins at each level, but players can also use real money to buy candy coins in bulk, with 100% of the in-app proceeds going to help feed children around the world through the Rice Bowls organization. (http://www.ricebowls.org).

The Hunger Crunch app is available for free in the App Store for iPhone, iPad and iPod Touch. It is also available in Google Play for Android.

Facebook’s “Social Good App of the Year" is not only super challenging it also feeds orphaned children worldwide!General announcement graphic

Beat Hunger in a game and in the real world too!Easy (and Free) to play - but Hard to master! Will you take down Hunger?

Let's Crunch Hunger!You and your magical Beasty will have loads of fun stomping Hunger Minions while you're doing good in the world at the same time!