Royal Flush Havanese announces information describing why it is important to spay and neuter all household pets, and how doing so can be beneficial both for the pet and the household in which s/he resides. 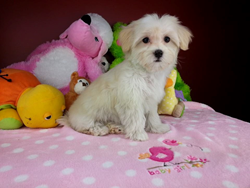 A happy puppy is a fixed puppy!

...an unspayed female canine is 12 times more likely to develop mammary tumors than a dog spayed before her first birthday.

With the warmer weather approaching, many dog owners are excited to let their canines outside for longer periods of time. However, more time outside increases canine risk for unplanned contact with other dogs, an event that can quickly become harmful if one or more of the dogs is not spayed or neutered. Because of pet owners failing to fix their pets, millions of unplanned pregnancies occur every year, filling up shelters with homeless animals. July 5th is the busiest day of the year for most pet shelters, a date that presupposes springtime to be the time when many canines become unwarrantedly pregnant. Pet pregnancies can easily be prevented by either spaying or neutering pets. Spaying, the process of removing both ovaries and the uterus of female animals, and neutering, the process of removing a male animal’s testicles, are both common surgeries that can be performed relatively quickly and painlessly for the pet. Read on to discover the top 4 reasons to spay or neuter pets, as announced by Royal Flush Havanese.

1.) Firstly, spaying and neutering can have significant health benefits for pets.This time of year, the warmer weather allows for dogs to be outside for longer periods of time, potentially increasing their contact with unknown, free-roaming dogs. Intact dogs are more prone to territorial aggression, and when left outside, may fight with other canines in the area. For their health and safety, all canines should be spayed or neutered. Additionally, spayed females have a reduced or eliminated chance of developing mammary gland tumors, ovarian and uterine cancer, mastitis, and transmissible venereal sarcoma. The risks of developing any of these conditions is further eliminated if the female is spayed before her first heat cycle– an unspayed female canine is 12 times more likely to develop mammary tumors than a dog spayed before her first birthday. For neutered males, the risk of testicular cancer, venereal tumors, perineal hernias, acute and chronic prostatis, and perianal gland adenomas is either reduced or eliminated.

2.) Secondly, spaying or neutering a pet can help to reduce pet ‘messes’ around the house. An unspayed female canine usually experiences her first estrus between six and 24 months of age. During this time, estrogen levels fluctuate sharply, attracting male dogs for a period of about 18 days. With spring being a primary mating time for many species, it is best to fix any pets before letting them outside during this time. For smaller dog breeds, females usually go into heat about two to three times a year. While a female is in heat, she will excrete bloody vaginal discharge, and urinate much more often in an effort to attract males, which will in turn cause males to hang around a household and exhibit behaviors described below. Avoid any unwanted pregnancy or messes around the house by spaying females.

Unneutered male canines are prone to spraying, or marking their territory by urinating. They will do this anywhere, either inside or outside, and can easily create a very smelly mess. Additionally, intact males are even more prone to spraying when they observe female dogs in the area. Neutering the dog can usually completely eliminate spraying tendencies.

3.) Thirdly, spaying or neutering a pet can drastically alter their behavior in a positive way. Perhaps most importantly, canine tendencies to roam and seek out the opposite sex will be diminished, lessening their chance of being hit by cars, getting lost, or being injured, and eliminating unwanted pregnancies due to dogs escaping fenced-in yards unbeknownst to their owners. When in heat, female dogs tend to become more irritable and nervous due to the flux in estrogen levels, and can become more aggressive. Additionally, some female canines will exhibit “false pregnancy” behavior after a heat cycle, and will adopt objects found around the house and treat them as if they are her puppies. The female will assertively guard these objects, and occasionally become overprotective and may even act aggressively toward well-meaning human intervention. By spaying a female, her estrogen levels stop fluctuating, and the occasional changes in her behavior can be eliminated. Additionally, both intact male and female canines are more likely to fight one another over the attention of a female or male dog, respectively, or to fight one another over territory. By fixing pets, their territorial and dominant tendencies can be reduced.

4.) Lastly, spaying and neutering pets can be very cost-effective. As mentioned above, one simple surgery of either spaying or neutering a pet can reduce or eliminate many common diseases and illnesses in pets, most of which are life threatening. Therefore, paying to have a pet fixed before these conditions develop will help to save thousands on medical treatment later in their lives. In addition, taxpayer money often goes toward the cost of caring for and/or euthanizing unwanted shelter pets. By spaying or neutering a pet, the owner can be sure their pet will not have any unwanted pregnancies, and will not contribute to the current overpopulation of animals living in shelters.

Although there are some minor health risks associated with the spay or neuter surgery, Royal Flush Havanese urges all pet owners to take responsibility for their animals and to spay and neuter them as soon as possible. Royal Flush Havanese is a Better Business Bureau accredited business specializing in breeding and raising Havanese puppies born and raised in Rhode Island and Florida. Royal Flush Havanese has been awarded a Certificate of No Complaints from the BBB and a company rating of A+ for outstanding dedication of honesty in the business place, customer satisfaction, and for ethical policies and procedures. Please join us in our quest to teach others about the loyal, gentle and lovable Havanese breed. Like us on Facebook and check out our website where you can find even more helpful articles and informative tips for dog-enthusiasts and breeders alike.