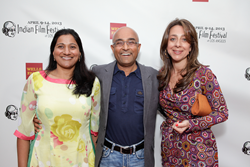 The fact that the festival comes at this time of year does not effect our commitment to pursuing something that impacts business, culture, and community.

Gumbiner Savett Inc. has sponsored the Indian Film Festival of Los Angeles for the past six years and Shreedhar (Shree) Kothari, CPA, a shareholder of the firm, has served as a board member for the same amount of time. In these past six years the event has usually run during the end of tax busy season. Although the timing adds additional pressures to Shree’s job, he wouldn’t change a thing.

“The festival has been during this time of year since its inception 12 years ago,” says Kothari, “so in the years I have been on the board, it has become part of my busy season schedule.” Kothari says that he has become more organized and prepared for the season due to his hectic schedule during this time of year. The festival itself begins on April 8th and runs through the 12th, 2015, at the ArcLight Hollywood theater, ending three days before the April 15th tax deadline.

“We are extremely supportive of all of our partners’ charitable efforts,” says Michael Savoy, the firm’s Managing Director, “the fact that the festival comes at this time of year does not effect our commitment to pursuing something that impacts business, culture, and community.”

The 13th Annual Indian Film Festival of Los Angeles (IFFLA) will take place April 8-12, 2015 at ArcLight Hollywood, the elegant, state-of-the-art facility at Sunset and Vine in Hollywood. IFFLA is a nonprofit organization devoted to fostering a greater appreciation of Indian cinema and culture by showcasing films, supporting emerging filmmakers, recognizing the leadership of entertainment industry performers and business executives, and promoting the diverse perspectives of the Indian diaspora.

Each year the festival features a rich mix of film programs designed to build and support the growing interest in the Indian entertainment industry. This includes programming that cultivates an audience for Indian films while supporting filmmakers of Indian descent in career development as they navigate the larger studio system in Hollywood.

For a full line-up of the films participating in the festival: http://www.indianfilmfestival.org

Headquartered in Santa Monica, Gumbiner Savett Inc. is a full-service accounting and consulting firm. The purpose of our work is to enrich our client’s lives by facilitating the achievement of their financial objectives and providing career fulfillment for our employees.

We are dedicated to being the preeminent assurance, tax and business advisory firm for growth oriented businesses, middle market enterprises and high-net worth individuals in Southern California. In addition to traditional private and public company accounting and tax services, the firm specializes in general business consulting, estate and trust planning, fraud examination studies, business services and bookkeeping, and litigation support.