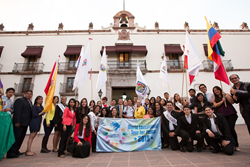 It is vital that the authorities adopt and promote this campaign because they have the responsibility of guaranteeing these rights.

Human trafficking is a situation of grave importance in Mexico and other Latin American countries. According to the U.S. State Department, “Mexico is a large source, transit, and destination country for men, women, and children subjected to trafficking in persons, specifically forced prostitution and forced labor.”

The president of a Queretaro anti-trafficking commission briefed delegates and their guests on the extent and ramifications of human trafficking and its toll on victims. She introduced a 20-year-old woman who told her harrowing story of being forced into prostitution at age 15.

Presentations by leaders of various delegations to the conference included:

The Youth for Human Rights coordinator for the state of Puebla, whose chapter helped organize the Summit and facilitated the activities of the delegates, has a weekly human rights radio show and holds human rights petition drives.

A law enforcement official has trained some 2,000 officers on the basics of human rights using the Youth for Human Rights curriculum. “It is vital that the authorities adopt and promote this campaign,” he said, “because they have the responsibility of guaranteeing these rights.”

The conference was followed by a training seminar where delegates networked, shared their successful actions and honed their skills to accomplish maximum impact with their human rights educational activities.

The Youth for Human Rights World Tour has traveled some 450,000 miles and visited more than 80 countries, meeting with youth, educators and officials and agencies to promote education in the UN Universal Declaration of Human Rights to create a generation of advocates for tolerance and peace.

To make United for Human Rights and the other humanitarian and social betterment initiatives it supports even more broadly available, the Church of Scientology has published a brochure, Voice for Humanity—Real Help, Real Results.

Inspired by the words of L. Ron Hubbard, Founder of the Scientology religion, that “a being is only as valuable as he can serve others,” Scientologists wholeheartedly support these programs. Participation and collaboration in these initiatives is invited and welcomed from all who seek to improve conditions for themselves and others.

For more information, visit the Scientology website at http://www.Scientology.org/how-we-help/voice-for-humanity.