Friends of Science Society’s new report entitled “Reality vs. Climate Change Uncertainties” challenges claims of ~70 Canadian scholars who want a carbon tax and who think hydro and wind power could “100% replace fossil fuels and nuclear.” Friends of Science say neither proposition would benefit Canada and the low carbon power notion is illogical and infeasible. 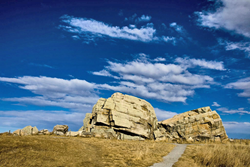 The "Big Rock" near Okotoks, Alberta, Canada Evidence of Global Warming 10,000 years ago

(CALGARY) In response to the recent “Acting on Climate Change” report by some ~70 Canadian scholars, supported by the Trottier Institute of McGill University, Friends of Science Society have issued an evidence-based rebuttal entitled “Reality vs. Climate Change Uncertainties.”

Canadian premiers will converge on Quebec City April 14, 2015 to discuss climate change policies and Friends of Science want them to make decisions based on evidence, not emotional climate change rhetoric like that of numerous eco-groups that are planning mass demonstrations on April 11th, as reported by CTV Montreal, March 15, 2015.

A recent University of Calgary Schulich School of Engineering Alumni “Distinguished Speakers Panel” held on March 11, 2015 informed the ~400 guests of the intricacies of the power generation market, but such technical expertise is lacking in “Acting on Climate Change” in the opinion of Friends of Science. Alberta has the highest per capita concentration of engineers and geoscientists in Canada and is the only province with a diversified, deregulated power market and no public utility debt.

Friends of Science point out that claims are made by the ~70 scholars that Canada could go to an east-west ‘low carbon’ power grid reliant on solely on hydro and wind, but power generation experts in "Reality vs. Climate Change Uncertainties" say this is technically infeasible, absurdly expensive and would put Canada at risk of national black-outs.

The ~70 scholars also claim to unanimously support a national carbon tax, but Friends of Science present evidence showing how carbon taxes and cap-and-trade systems have decimated economies around the world with no benefit to the environment. In Europe, the carbon trading system has been shut down several times by Interpol for fraud and corruption but Quebec is reportedly pushing for other provinces to join their climate change cap-and-trade market, according to a Globe and Mail report of Jan. 15, 2015.

Friends of Science research shows that stringent climate change subsidies, policies and targets in Europe have led to ludicrous ‘low-carbon’ financial incentives to burn wood pellets as ‘green’ energy, despite those pellets being shipped half-way around the world from Canada by the polluting ocean freighter diesel fuels. http:// The Economist called this ‘environmental lunacy’ in an April 6, 2013 report.

Friends of Science say the optimistic claims the ~70 scholars made up of biologists, forestry, environmental science or policy experts, have not reported on any negative consequences of climate policies. Friends of Science Society says this runs counter to academic integrity and to having a properly informed debate.

For example, Friends of Science note that the scholars make conflicting statements - pushing for wind power, yet demanding stringent protection of species at risk and forest lands. According to a University of Calgary study, reported on in New Scientist on Aug. 25, 2008 at one wind farm alone some 188 dead and dying bats were recovered in one day from a Southern Alberta wind farm; bats eat pine beetles that decimate forests, they consume pounds of agricultural pests that damage food crops. Wind farms kill bats in great numbers and they die a cruel death as changing air pressure near the turbines makes their lungs explode.

With the global warming ‘hiatus’ continuing now for over 16+ years, as reported by Dr. Judith Curry Oct. 9, 2014 in the Wall Street Journal Friends of Science advise Canadian premiers to wait two to four years on making any climate change policies.

Canadian premiers, policy advisers and citizens are invited to refer to expert advice in the “McKitrick on Climate” video series and related layman’s guide to Social Costs of Carbon on the Friends of Science home page.