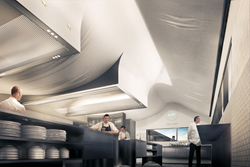 The form of The French Laundry’s new kitchen ceiling will evoke a tablecloth being gently unfurled across a table, while also hiding the ceiling’s functional elements. The sweeping vaults will create

"The French Laundry is being redesigned to be a backdrop worthy of the restaurant's history,” Chef Thomas Keller said.

The renderings are in—and the design team chosen—for a historic renovation of The French Laundry, the first major overhaul of the landmark restaurant in 20 years. International design firm, Snøhetta, is the lead design and landscape architect, working in collaboration with California-based firms Envelope A+D as executive architect and Tim Harrison of Harrison, Koellner, LLC as kitchen designer. The renovation will result in a new and expanded kitchen and courtyard, an auxiliary building to house a wine cellar and support offices, and a new arrival experience to enhance the approach to the iconic blue door.

While the historic restaurant will remain unaltered, all of the former kitchen structure and auxiliary buildings have been demolished to make way for the modernization. Wright Contracting leads the construction.

“The French Laundry is being redesigned to be a backdrop worthy of the restaurant's history,” Thomas Keller said. “With the Louvre Pyramid as my inspiration, we wanted to find a way to juxtapose the historic and the modern while maintaining the high quality cuisine and service our guests have come to expect from The French Laundry. The new design will be an innovative and functioning space that will allow us to continue to evolve as a restaurant and develop new standards.”

Every element of the design strikes a thoughtful balance between form and function, beginning with the guests’ first step onto The French Laundry property. In preparation for the project, Snøhetta’s Craig Dykers spent many hours in Chef Keller’s kitchen, observing the rhythm and the culture of the restaurant. Snøhetta’s design aims to create a meaningful environment for those who work there, recognizing Chef Keller’s emphasis on efficiency and precision, along with his vision that the kitchen is the keystone of a world-class restaurant experience.

“An experience at any of Chef Keller’s restaurants transcends expectation. The kitchen is the starting point for an architecture of connection, energy and authenticity. As Chef Keller makes us aware, the kitchen is where all the senses are first ignited,” said Craig Dykers, Founding Partner of Snøhetta, and longtime friend of Chef Keller. “The French Laundry kitchen is both primal and innovative, setting the stage for culinary magic.”

The renovated kitchen will support the graceful choreography for which the restaurant’s culinary and service teams are known. The new custom vaulted ceilings, fabricated by local manufacturer Kreysler & Associates, will evoke a white linen table cloth being gently unfurled across a table, while also hiding the ceiling’s functional elements. The sweeping vaults create large skylights that will let in ample natural light and sound-dampening ceiling panels will reduce ambient noise. The new kitchen will also be equipped with customized ventilated ceiling systems by Halton Americas that use remote sensors to control air flow.

“The renovation of The French Laundry kitchen is not simply a face-lift. It is a commitment by Chef Keller and his team to continually aim themselves toward the moving target of perfection,” said Douglas Burnham, Principal/Founder, Envelope A+D.

In addition to expanding the kitchen’s size by 25 percent, the renovation will make for more efficient use of space, creating one contiguous room for the entire culinary team with a visual connection from station to station. With walls, flooring and work stations all fashioned out of Dekton, the ultra-compact surface by Cosentino, the new kitchen will feature a white-on-white palette—a nod to the sense of promise and potential of a fresh start. The kitchen equipment will feature two unique Moltini suites by Electrolux and commercial ranges by Hestan Commercial. The ground-up construction of a new Kitchen Annex will house The French Laundry’s support functions including the prep kitchen, butchery, produce breakdown, and management offices. It is also home to The French Laundry’s regarded wine collection, with the storage capacity to hold up to 14,000 bottles.

Energy conservation and efficiencies are also critical components of the renovation. Renewable energy solar panels by NRG will be installed and the kitchen will feature a power generation system utilizing new fuel cell technology by Bloom Energy. An expansion of the existing unique geothermal loop is planned as well to further improve overall sustainability.

During construction, Envelope A+D conceived of using shipping containers as modular units for a temporary kitchen in the restaurant’s former courtyard, allowing for service to resume and maintain the restaurant’s important contribution to Yountville’s tourist-driven economy. Tim Harrison, Chef Keller’s kitchen designer-of-record for the past 20 years, designed and adapted the temporary space as a recreation of the former French Laundry kitchen, complete with its five stars mounted hood. Envelope A+D’s work on the temporary kitchen leverages the firm’s extensive experience enlivening underused physical spaces in such notable locations as San Francisco’s PROXY, NOW_hunters point, and California College of the Arts.

“By designing and constructing a new kitchen, arrival courtyard and auxiliary building that will complement in many ways the historic value and elements of our beautiful French Laundry, we now clean the slate, begin anew, and ready ourselves for the next 20 years,” Chef Keller said. “It’s a tremendously exciting project on many levels, and I can’t think of better design firms to partner and collaborate with than Snøhetta and Envelope A+D.”

Chef’s daily nine-course tasting menu and a nine-course vegetable tasting menu are artfully crafted using classic French technique and the finest quality ingredients available. The restaurant’s beverage program is also highly regarded, consisting of an expansive wine list made up of selections from the worlds’ best and most distinctive producers. The Spirits program, curated by Chef himself, includes the world’s most fine and rare bottlings.

The French Laundry is a member of French-based associated Relais & Chateaux, Relais Gourmands and Traditions & Qualité organizations recognized for their dedication to maintaining the highest international standards for hospitality and culinary excellence. For more information about The French Laundry, please visit http://www.thomaskeller.com/tfl.

About Snøhetta
For over 25 years, Snøhetta has been designing civic and cultural projects internationally. Since its inception, the office has maintained its trans-disciplinary approach, integrating architecture, landscape, interiors, and graphic design into its projects. Snøhetta began its career in 1989 with the competition-winning entry for the new library of Alexandria, Egypt. This was later followed by the commission for the Norwegian National Opera in Oslo, the National September 11 Memorial Museum Pavilion in New York, and the SFMOMA Expansion in San Francisco, which will open to the public in spring 2016. The office is currently working on the Redesign of Times Square, under construction in New York City, the Lascaux Caves Museum and Headquarters for the French newspaper, Le Monde, in France, the New Central Library in Calgary and the recently completed Ryerson University Student Learning Centre in Toronto, Canada. Snøhetta also recently won a competition to re-design Norway’s banknotes, which will go into circulation in 2017.

Among its many recognitions, Snøhetta received the World Architecture Award for the Bibliotheca Alexandrina and the Norwegian National Opera and Ballet, and the Aga Kahn Prize for Architecture for Alexandria Library. Since its completion in 2008, the Norwegian National Opera and Ballet has also garnered the Mies van der Rohe European Union Prize for Architecture and the EDRA (Environmental Design Research Association) Great Places Award, as well as the European Prize for Urban Public Space, The International Architecture Award and The Global Award for Sustainable Architecture in 2010. For more information about Snøhetta, please contact Kelly Tigera at (646) 383-4762, kelly(at)snohetta(dot)com.

About Envelope A+D
Envelope A+D is an architecture and design firm exploring points between polarities: public + private; temporary + permanent; flexible + fixed; design + execution. Their multi-disciplinary approach to finding the optimum coordinates of features, systems and style for projects of every scale and typology has garnered them several awards: Architectural Record’s Design Vanguard, Best Building of 2012 by the San Francisco Architecture Foundation and inclusion in the United States Pavilion at the 2012 Venice Architecture Biennale.

Envelope A+D is headquartered in the San Francisco Bay Area and has a satellite studio in Los Angeles. Envelope A+D’s current and recent clients include the Delfina Restaurant Group, Google, YouTube, Facebook and PG&E. Envelope A+D is also the architect, developer, and curator of PROXY, a globally recognized temporary development in San Francisco. For more information about Envelope A+D, please contact Lindsey Schott, Director of Communications, at (563) 249-5786, lindsey(at)envelopead(dot)com.

About Harrison, Koellner, LLC
Harrison, Koellner, LLC., is the result of years of close cooperation and collaboration in the creation of outstanding restaurant and food service facility designs between the partners, who have now put their creative powers together in one Company. The goal of Harrison, Koellner, LLC, to provide complete state of the art computer aided design services and equipment specification to Restaurateur/Owner and Architectural Firms.

Harrison, Koellner, LLC., provides a full range of Food Service Facility Design Services including: Planning and Programming, Schematic Design, Design Development, Specification Writing, as well as the Permit and Construction Documents required for project approval and development. Additionally with the inclusion of new Associates, Harrison, Koellner, LLC., can provide basic Interior Design and Architectural Design support for the client, thus providing the services to interface with the Architects of Record to solve Architectural/Food Service Design problems in a more streamlined and comprehensive manner. For more information about Harrison, Koellner, LLC please call (415) 380-1787.

The French Laundry’s new landscape design will double the size of the existing garden and provide a new vehicular drop-off entry, extending the guest experience to the street edge. Rendering: Snøhetta

Arriving at The French Laundry’s courtyard, guests will be greeted by the scent of California almond blossoms. Rendering: Snøhetta

The French Laundry’s new landscape design will double the size of the existing garden and provide a new vehicular drop-off entry, extending the guest experience to the street edge. Rendering: Snøhetta

The French Laundry’s kitchen expansion will give guests a view of the chefs at work inside. Rendering: Snøhetta