The recent revelation that that 84 out of 85 undergraduates failed to reproduce the iconic Apple logo, despite the majority being Mac users themselves, highlights the unique ways in which our brains process information, according to Dr. Sandeep Grewal, author of the book “Dementia Express.” 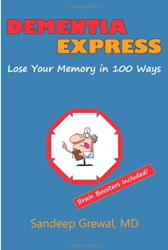 Grewal’s book was designed to be a mental workout of its own. The text utilizes backwards logic and frequently contradicts itself as an exercise in decoding its true meaning.

In the study conducted at UCLA, participants were asked to recreate the logo on paper by memory, while others were asked to simply pick it out of a logo line-up consisting of similar, slightly-altered versions. Despite how confident many of the volunteers felt about their own familiarity with the brand before the test, fewer than half were able to successfully identify the correct one.

"People had trouble picking out the correct logo even when it was right in front of them," said senior author of the study, Dr. Alan Castel, associate professor of psychology at UCLA. This is the same Dr. Castel who in 2012 demonstrated how unfamiliar most people are with fire extinguisher locations where they work, despite, in many cases, passing them every day.

The results were published in March in the Quarterly Journal of Experimental Psychology, and were attributed to the ways in which the mind retains data. Some data is more roughly retained, the study explains, and perhaps our brains learn to discern between which memories are more crucial, and which are more disposable.

“It’s also a reflection of how muddled the modern mind has become,” Dr. Grewal adds. “Our brains are so bombarded by data, much more than with earlier generations. We lose our concentration much easier, and sometimes we think we’re paying far better attention than we actually are.”

Grewal is an internal medicine specialist practicing in both Carolinas, and author of the book “Dementia Express” which deals specifically with keeping our minds more sharpened as we age.

“Like any other muscle, the brain needs an occasional workout - if not a regular routine,” he explains. “To stave off dementia, to keep yourself sharp and keep motor function in top working order, that’s why we exercise our minds.”

Grewal’s book was designed to be a mental workout of its own. The text utilizes backwards logic and frequently contradicts itself as an exercise in decoding its true meaning. Readers are encouraged to forget what they’ve learned, and to not worry about trouble signs, all while suggesting the exact opposite.

“It’s a fun way to your brain on its toes” the doctor adds. “It’s a real page turner, as you literally never know what’s on the next page.”