A study conducted by a team from Western University of Health Sciences in Pomona, California deemed New York City carriage horses are less stressed than those in pastures. The horses studied were quartered at Clinton Park Stables, West 52nd Street, New York from Aug. 3 to 5, 2014, to gauge what levels of stress the animals might have as a result of their work. 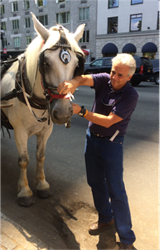 “We found no evidence of stress in these horses. The conclusions made by the many experts in equine veterinary care who have visited the facility, and spent time in observation, is matched by the physiologic data we collected.” Bertone said.

It doesn’t come straight from the horse’s mouth, but it could be the next best thing: A Western University of Health Sciences-led study indicates that while New York City Mayor Bill de Blasio is concerned about their welfare, carriage horses that trot the streets around Central Park and other NYC landmarks are not as stressed as the mayor might think.

Mayor de Blasio’s proposed ban on horse-dawn carriages has been a hotly debated topic in New York City since December 2014, when he proposed city legislation that would outlaw their operation. de Blasio, who was elected mayor in 2013 and took office in January 2014, is politically and financially backed by animal-rights advocates, and prior to taking office announced that he planned to “get rid of horse carriages, period,” in support of those who believe the horses are treated inhumanely.

His proposed code amendment, which requires a majority vote of the New York City Council, would go into effect June 1, 2016. The mayor has suggested replacing the carriages with electrically-powered antique cars.

Dr. Joseph Bertone, DVM, MS, DACVIM, WesternU College of Veterinary Medicine (CVM) Professor of Equine Medicine, approached the stable management with an idea to evaluate stress in the horses. Dr. Bertone, second-year CVM student Sarah Mercer-Bowyer, and CVM Assistant Professor of Physiology David Kersey, PhD studied the horses quartered at Clinton Park Stables, West 52nd Street, from Aug. 3 to 5, 2014, to gauge what levels of stress the animals might have as a result of their work.

Results of the study, “Evaluation of well-being of New York City carriage horses,” were presented February 27, 2015 at the International Federation of Applied Animal Behaviorists, Fort Worth, Texas. It has been accepted for presentation at the upcoming (June 4, 2015) Scientific Meeting of the American College of Veterinary Internal Medicine, Indianapolis, and Veterinary Behavior Symposium in Boston, and is submitted for presentation at the Annual Convention of the American Association of Equine Practitioners, Las Vegas, December 2015. It also is scheduled to be submitted to the Journal of the American Veterinary Medical Association.

“I wanted to identify the effect this situation has on these horses,” Bertone said, “Ultimately, I’m concerned about equine welfare. On the other hand, I’m also concerned over claims that could dismantle, or likely end, the lives of these grand horses. The same claims could see the loss of an iconic New York City institution, the loss of the important human-animal bond the drivers have with these spectacular animals, as well as have a profound negative economic impact on the people whose lives this would touch.

“So it’s important we collect the research and analyze the results objectively. In other words, let’s deal with the facts.”

Bertone and Mercer-Bowyer tested 13 of the more than 70 horses at Clinton Park. Five mares and eight geldings were selected at random.

“We found no evidence of stress in these horses. The conclusions made by the many experts in equine veterinary care who have visited the facility, and spent time in observation, is matched by the physiologic data we collected.” Bertone said. “Although not part of our study, we also observed for behavior associated with equine gastric ulcer syndrome. Ulcers result from stress. None of the behaviors were seen. We found the horses rested comfortably at night as well. That is another important feature of horses in a safe, comfortable environment.”

New York’s current regulations for working carriage horses can be found here. One regulation includes requiring the horses to get a five-week pasture furlough period per year.

Mercer-Bowyer was sent to a farm in Pennsylvania where horses go for “vacation,” to collect feces samples so that the WesternU CVM team could look at their levels of cortisol, which identifies stress. She took samples from the New York stable horses on vacation in pasture, with interesting results: Pasture horses have far greater range of fecal cortisol stress than their counterparts in New York City pulling carriages.

“The tendency is to anthropomorphize that they (pasture horses) are happier and better off,” Bertone said. “The truth is that (carriage horses) spend their lives in this stabled situation, with food in front of them and with their herd mates nearby. Horses are habitual herd animals. Being put out in a pasture for five weeks may not be that great of an experience for them.”