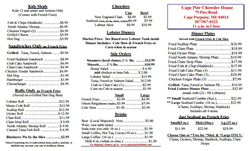 Open seasonally, Cape Pier Chowder House Restaurant serves a variety of meals to satisfy any appetite, including fresh caught lobster, shrimp, and scallops, all in a relaxing and casual atmosphere.

Situated at the end of Pier Road next to the town pier and alongside the beautiful Maine coast, the restaurant directly overlooks the water, providing dinners with a view of local lobster boats in the harbor. Seating is available either inside the restaurant or outside on the deck.

Our 2015 menu is here, so you can start deciding on your first order now. We look forward to seeing you in beautiful Kennebunkport, Maine!