iPatientCare demonstrated the value and importance interoperability by being a part of robust, highly automated certification program and certifying as the first ConCert by HIMSS™ certified ambulatory EHR 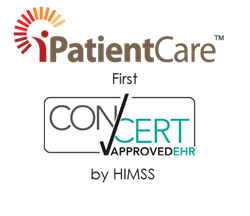 We believe this is a significant achievement for iPatientCare, in line with its goals of being a high achiever and thought-leader in this space...' - Udayan Mandavia, President/CEO, iPatientCare

iPatientCare is the first recipient of the ConCert by HIMSS™ EHR certification from ICSA Labs based on Interoperability Work Group (IWG) specifications as of today. This certification was granted after rigorous and thorough testing to the technical specifications for the following HER Edge and Direct Edge System test groups:

“We are very happy and proud for being one of the first vendors to certify as a ConCert by HIMSS™ EHR. We believe this is a significant achievement for iPatientCare, in line with its goals of being a high achiever and thought-leader in this space that will contribute in creating an enduring impact in making interoperability a reality in healthcare.” said Udayan Mandavia, President/CEO, iPatientCare.

Kedar Mehta, Chief Technology Officer, iPatientCare commented, “The healthcare marketplace lacks consistent interoperability standards that allow for connectivity among disparate EHR systems and health information exchanges (“HIEs”) in order to undertake Patient Record Lookup, that is, allowing clinicians to query an HIE for relevant data on a specific patient. By implementing all important IHE profiles within iPatientCare EHR and being the first ConCert by HIMSS™ EHR to be certified, our provider users are assured now that their investment in EHR is protected and valuable towards achieving secure health information exchanges.”

“The ConCert by HIMSS™ program leverages the IWG specifications that align both IHE Technical Framework specifications and ONC certification criteria to set a high bar of interoperability toward secure and reliable exchange of patient health data,” said Joyce Sensmeier, MS, RN-BC, CPHIMS, FHIMSS, FAAN, vice president, informatics, HIMSS North America. “As the initial health IT system to meet the requirements of this rigorous testing and certification program, iPatientCare has demonstrated the value and importance of being part of this robust, highly automated certification program that uses a single set of standardized, easy-to-implement connections to support communication among health IT systems.”

Information technology is transforming the healthcare industry, and a shared national vision is taking shape. Now is the time to deliver healthcare that results in interconnected and personalized care, based on smarter architecture and enhanced privacy and security. Visit Booth# 2941 at HIMSS15 Exhibit Hall to see and believe the full landscape of integrated health IT solutions and live demonstration of interoperability and efficiencies.

iPatientCare EHR 2014 (2.0) has received 2014 Edition Ambulatory Complete EHR certification by ICSA Labs, an Office of the National Coordinator-Authorized CertificationBody (ONC-ACB), in accordance with the applicable eligible professional certification criteria adopted by the Secretary of Health and Human Services (HHS).