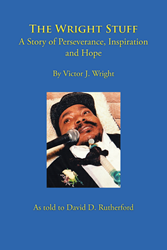 The Wright Stuff by Victor J. Wright and David Rutherford

After my injury I began to see life through a new lens.

Spinal injuries affect approximately 276,000 Americans with varying degrees of longevity and quality of life. For Victor J. Wright, his young age and athletic build aided him in beating the odds.

As a 15-year-old high school football player, Wright suffered a spinal cord injury during a botched play that paralyzed him from the neck down. In his new memoir “The Wright Stuff,” penned by David Rutherford, Wright describes his struggles and successes after becoming a quadriplegic.

In an effort to lead the path God has set for him, Wright graduated from Los Angeles City College, co-founded a nonprofit organization and became an ordained minister. In addition to his successes, Wright advocates racial and religious tolerance through his book.

“After my injury I began to see life through a new lens,” Wright said. “We are here on Earth to help one another find success to overcome adversity.”

Wright’s memoir details his early childhood struggles with having a mentally ill father and overworked mother as well as his life leading up to his injury and how he has overcome adversity to achieve greatness.

“The Wright Stuff: A Story of Perseverance, Inspiration and Hope”
By: Victor J. Wright and David Rutherford
ISBN: 978-1-4969-3929-6
Available in softcover, hardcover, e-book and audiobook
Available on Amazon, Barnes & Noble and AuthorHouse

About the author
Victor J. Wright has been a quadriplegic for roughly four decades. Determined to not wallow in sorrow, Wright made the most out of the life God set for him. Wright acts as a role model and inspiration for people having difficulties accomplishing their goals. He aids in relief efforts for victims of natural disaster around the world and donates books and audiovisual materials to local libraries. Wright’s lifelong friend, David Rutherford, worked with Wright to pen “The Wright Stuff.” The two friends live in the Los Angeles area.