Socially-Driven Companies Have A Competitive Advantage In Business

A new survey conducted by The Alternative Board finds that socially-driven companies are more optimistic, ahead of their competition, and united by a stronger personal vision. 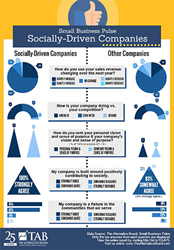 “Companies who do good, do well – better than the competition.” – Bill Paolillo

A recent survey of small business owners by The Alternative Board (TAB) revealed that 38% of respondents strongly agree that their company “is built around positively contributing to society.” The results of the survey show that socially-driven businesses are more optimistic, fare better than their competition, and represent a stronger personal vision.

What defines a company as being socially-driven? The survey suggests that socially-driven companies are companies that focus on their people. 85% of the businesses that identified as “socially-driven” strongly agree that their company “pursues win-win relationships with customers, employees, partners, and other key stakeholders.”

“Socially-driven companies seem to place an increased importance on human connections and relations,” says TAB Vice President David Scarola. “They listen closely to what stakeholders are saying, but don’t neglect their employees or customers. It can be a difficult balance for other businesses to strike, but it may also be the key to a better overall sense of purpose and a more confident approach to doing businesses.”

Scarola suggests that the key to this advantage is a strong sense of personal vision. When asked “how would you rate your own personal vision and sense of purpose,” 20% of socially-driven owners selected a 10 (out of 10) compared to 7% of other owners, who more commonly selected a 7 or 8.

“A clear personal vision is an excellent motivator for success – especially when shared with others,” Scarola says. “By aligning their vision with their people, socially-driven business owners are held further accountable to their goals.”

“Companies who do good, do well – better than the competition,” says TAB franchise owner and author of The Glass Company, Bill Paolillo. “What we found was the company's growth came from referrals by their customers, employees and suppliers. Companies for good recognize their customers are a bridge for their message – a means for broad dissemination enabled by the Internet.”

To read a full review of the survey’s findings and learn more about what they mean for your business, visit The Alternative Board. For more information, or to schedule an interview with David Scarola, contact Lynn Maleh at lynn(at)contentfac(dot)com.