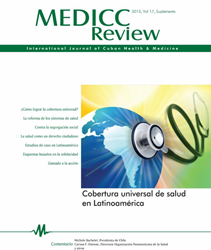 Today, the supplement was presented in Havana at CUBASALUD 2015, a convention attended by some 2,000 health professionals and 40 ministers of health from around the globe. PAHO/WHO representative Dr. José Luis Di Fabio joined MEDICC Review editors at the launch, and introduced a video salute to the Spanish edition by Dr. Carissa Etienne, PAHO Director and author in the series. “History shows that universal health access and coverage are truly attainable goals,” she said, noting that The Lancet series “presents part of this history …recognizing that each country must define its own path based on its historical, economic and cultural context.”

“We are extremely pleased to make this series accessible to Spanish-speaking colleagues,” commented Dr. C. William Keck, MEDICC Review editor-in-chief, “especially health professionals on the front lines, whose efforts are bringing their countries closer to health care for all. We hope the publication in both languages stimulates debate and opens new channels for sharing useful real-world experiences and results from the region.”

Drs. Etienne and Vega will preside over a second MEDICC Review Spanish-edition launch in Santiago de Chile on April 24 at the International Seminar on Universal Health Access and Coverage in Chile (looking towards the post-2015 Sustainable Development Goals), joined by Minister of Health Dr. Carmen Castillo, representatives of the Economic Commission for Latin America and the Caribbean (ECLAC), and other important national and international guests, as well as by Susana Jiles, MEDICC Review senior editor charged with the Spanish edition.

The Lancet series and MEDICC Review supplement were made possible in partnership with the Economic Commission for Latin America and the Caribbean (ECLAC), series coordinator; and by generous contributions from The Rockefeller Foundation and the Pan American Health Organization/World Health Organization (PAHO/WHO).

MEDICC Review is the first peer-reviewed journal in English dedicated to publishing original manuscripts by Cuban health and related professionals on topics of medical research, population health, and policies and practice of health in Cuba. The journal also publishes international authors on subjects related to health equity.