Sunstates Security supports employees serving in the active Reserve and National Guard during an event hosted at Raleigh, N.C. headquarters 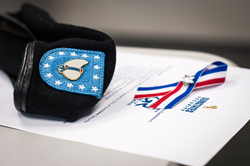 On April 16, Sunstates Security hosted an event at its Raleigh, N.C., headquarters to recognize team members serving in the active Reserve and National Guard. President Glenn Burrell and Chief Executive Officer Kathryn Burrell signed Statements of Support in a ceremony conducted by Employer Support of the Guard and Reserve (ESGR), an initiative of the U.S. Department of Defense (DoD).

Several members of the Guard and Reserve participated in the event, including retired U.S. Navy Commander and ESGR Area Chair Ken Oppenheim and Lt. Col. James Weaver III of the Army National Guard, both of Raleigh.

With more than 20 years of public service as a member of Scotland Yard, Glenn Burrell well understands the personal sacrifices of serving one’s country and community. “We’re proud to support those employees in the Guard and Reserve,” he says. “We are thankful for their service, and we are pleased to do what we can for them and their families.”

Since 1972, ESGR has promoted cooperation and awareness between Reserve Component Service members and civilian employers. The organization assists in resolving conflicts that arise from employees’ military commitment.

Based in Raleigh, N.C., Sunstates Security provides uniformed security personnel and security consulting services to clients throughout the Southeast, as well as in the Northeast and Southwest regions. The company is certified as a Women’s Business Enterprise by the Greater Business Women’s Council, a regional certifying partner of the Women’s Business Enterprise National Council (WBENC).