Her pastel painting "Footsteps #15" has been accepted into the upcoming 2015 International Association of Pastel Societies Master Circle Exhibition in June. 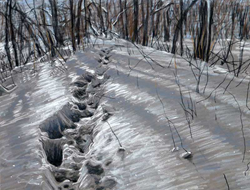 Linda Gross Brown's "Footsteps #15" has been accepted into the 2015 IAPS Master Circle Exhibition.

As spring winds its way through the calendar, Linda Gross Brown is already back in her studio preparing for the frenetic pace of a busy New York art season in the fall.

With only five months into the new year, Linda Gross Brown continues to seduce her admirers with the ethereal hauntings of her pastel paintings. As an honored recipient of the International Association of Pastel Societies Master Circle Medallion in 2011, she belongs to an exclusive group of pastel painters who are held to an even higher level of achievement. Linda’s painting, Footstep #15, was accepted into the upcoming 2015 IAPS Master Circle Exhibition in June.

Enthusiastic applause surrounded Ms. Brown for her winning entry of Footsteps #12 in the Pastel category of The Artist Magazine All Media Contest. Publication of her entry will be showcased in the highly anticipated July/August 2015 issue.

No stranger to international attention, Linda continues to leave an indelible impression on the European art scene. As "the city of lights" opens its arms in warm embrace, she rewards the overture with equal enthusiasm. The Winter 2015 publication of the French magazine Pratique des Arts took special notice when her work was tagged as an exceptional representation within the medium of pastel.

As spring winds its way through the calendar, Linda Gross Brown is already back in her studio preparing for the frenetic pace of a busy New York art season in the fall. One only has to imagine what 'the goddess of snow' has in store for us next.

As professional nods continue to turn into stares the world of fine art has no choice but to stand and take notice of such an exceptional talent. Her symbiotic mastery of color and light are hallmarks of the tranquility transcending her work. "Woodland scenery gives off an ethereal, almost spiritual quiet," Brown says. "I'm drawn to the incredible contrasts of the deep blacks and hot whites of early winter mornings, but especially the late afternoons that have a bright, clear blue sky. The white snow adds a pure and cleansing feeling to the landscape. The shadows are rich and deep, and whites almost blinding."

It is no wonder that Linda Gross Brown continues to be branded as one of the elite among both her peers and growing legion of admirers. The magic and majesty of her art belies the depth and complexities that such talent must possess leaving us no choice but to stand awed in amazement.