A Unique Combination of Historic and Recent Art Textiles and Sculpture at browngrotta arts in Influence and Evolution: Fiber Sculpture…then and now from April 24 - May 3 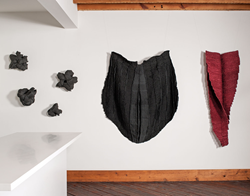 Influence and Evolution is an eyeful that limns out the complexity of mapping a global world of fiber and the pleasures of weaving, and the value in admiring skilled work...

Influence and Evolution: Fiber Sculpture…then and now opens this week for 10 days only at browngrotta arts, in Wilton, Connecticut, April 24th through May 3rd. The comprehensive exhibition features work from the early days of the contemporary textile art and sculpture movement and current works by established and emerging artists.

In its 28-year history, browngrotta arts has highlighted a group of artists – Sheila Hicks, Ritzi Jacobi, Lenore Tawney, Ed Rossbach and others – who took textiles off the wall in the 60s and 70s to create three-dimensional fiber sculpture. The influence of their experiments has been felt for decades. Influence and Evolution: Fiber Sculpture...then and now explores that impact and examines how artists have used textile materials and techniques in the decades since. In Influence and Evolution, viewers will see works from the 60s, 70s, 80s and later, by Magdalena Abakanowicz, Lia Cook, Kay Sekimachi and Françoise Grossen -- artists who rebelled against tapestry tradition — juxtaposed with works from a later generation of artists, all born in 1960 or after. Fiber sculpture continues to evolve through the work of this later group, including María Eugenia Dávila and Eduardo Portillo of Venezuela, Stéphanie Jacques of Belgium, Naoko Serino of Japan and Anda Klancic of Slovenia.

2014 saw contemporary art fiber and art textiles achieve renewed recognition worldwide. More than 10 important exhibitions opened in the US and abroad, including Thread Lines at the Drawing Center in New York, Fiber: Sculpture 1960-present at the Institute for Contemporary Art in Boston and Richard Tuttle: I Don’t Know, or the Weave of Textile Language at the Tate Gallery in London. In October 2014, the art newspaper reported that “textiles are gaining international stature in art museums” and further that “[c]ommerical interest is on the rise,” quoting art advisor Emily Tsingou: “Textile [art] has entered the mainstream.”

Fiber art's resurgence continues in 2015 in Objective Station, a celebration of the Lausanne Biennials in Switzerland, an examination of the work of Mariette Rousseau-Vermette, a participant in the Biennials, and her husband Claude Vermette at the Musée d'Art Contemporain de Baie St Paul in Quebec in June, and EY: Sonya Delauney at the Tate in London. Influence and Evolution is part of this rediscovery. The exhibition is an “eyeful,” writes Ezra Shales, PhD, Associate Professor of Art History, Massachusetts College of the Arts, in the exhibition catalog, Influence and Evolution: Fiber Sculpture…then and now available at http://browngrotta.com/Pages/c39.php. Influence and Evolution "limns out the complexity of mapping a global world of fiber and the pleasures of weaving and the value in admiring skilled work whether it begins with a piece of willow or skein of wool, an artist who searches for new form or seeks to recover old pathways.”

In its more than two decades in the field, browngrotta arts has promoted contemporary art textiles, sculpture and mixed media – through catalogs, art fairs, co-partnered exhibits at museums and online. "We represent a uniquely global group of artists, more than 100 in all," says Tom Grotta, co-curator at browngrotta arts. "We have hundreds of available works viewable online.” Since opening, browngrotta arts has placed works in dozens of private and corporate collections in the US and abroad, including Club Quarters in San Francisco and New York, the Okura Hotel in Macao and the permanent collections of the Metropolitan Museum of Art, Museum of Arts and Design, Art Institute of Chicago and the Philadelphia Museum of Art.

Influence and Evolution: Fiber Sculpture…then and now will be held in Wilton, Connecticut at browngrotta arts' 1895 barn, contemporized by architect David Ling, 276 Ridgefield Road, Wilton, CT. The Opening and Artists Reception is Saturday, April 25th from 12 to 6pm. On Sunday, April 26th through Sunday, May 3rd, the hours of the exhibition are 10am to 5pm. For more information call: 203.834.0623 or visit: http://www.browngrotta.com.