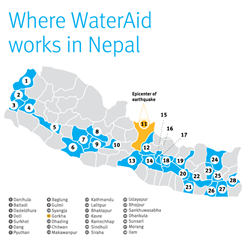 This map shows Gorkha, where the epicenter of Nepal's earthquake occured. WaterAid has been working in Gorkha, and the surrounding districts shown in blue, for the past 20 years.

We are working with our local partners to do everything possible to relieve the immediate suffering, and prevent any further loss of life.

“For many of the communities hit by this week’s earthquake, access to safe water and sanitation was a struggle even under normal circumstances. Making sure that people can access safe drinking water and effectively manage human waste in the coming days and weeks will be especially critical to preventing diarrhea, cholera and typhoid outbreaks that pose a serious risk to public health,” said WaterAid America CEO, Sarina Prabasi, herself a Nepali national.

“We are working with our local partners to do everything possible to relieve the immediate suffering, and prevent any further loss of life.”

Recently ranked by GuideStar’s Philanthropedia as the number one international non-profit working in the water and sanitation sector, WaterAid has been active in Nepal since 1987. The epicenter of the quake in the Gorkha district directly overlaps with where much of our work is concentrated, and is an area that is now in urgent need of water, food and medicine.

Our first priority is to offer immediate assistance in the communities where WaterAid works. WaterAid’s South Asia regional team is currently assessing the most pressing needs, and WaterAid staff from our offices in Bangladesh, India and Pakistan are standing by to assist. Efforts are likely to include the provision of safe water, water purification tablets, emergency sanitation measures and hygiene kits, in close coordination with our partner organizations.

In addition to the hard-hit Gorkha district, WaterAid has water, sanitation and hygiene projects in 27 districts across the country.

WaterAid is further planning for the long-term rebuilding of water and sanitation services that will be needed. Even before this crisis, nearly half the population—13 million people—were without a basic, safe toilet. At the same time 3.6 million people did not have access to clean water, and some 1,900 children under the age of five died in Nepal each year from diarrheal diseases caused by the lack of safe water, toilets and handwashing with soap. Those numbers can be expected to rise following this week’s disaster.

“Nepalis are known world over for their courage, strength and resilience—all of which are being severely tested at this time. We are relieved beyond measure that all WaterAid staff in Nepal are safe and accounted for, yet our hearts go out to all those who are experiencing such devastating loss and suffering,” said Prabasi.

Those interested in making a donation to WaterAid’s on-the-ground work in Nepal are encouraged to do so online at: http://www.wateraid.org/us/get-involved/nepal-earthquake

WaterAid is an international non-profit organization dedicated to helping the world’s poorest people gain access to safe water and sanitation. WaterAid works in 26 countries across Africa, Asia, Central America and the Pacific region. Since 1981, WaterAid has reached 21 million people with safe water and, since 2004, 18 million people with toilets and sanitation. For more information, visit WaterAid.org