National Center for Policy Analysis Youth Programs Director Rachel Stevens responds to the Nation's Report Card, released this week. This expert analysis is for your free and unrestricted use. 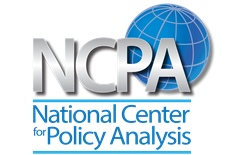 America requires an informed and engaged populace. By supporting debate programs in your local schools, you can help ensure the next generation will be ready to accept the torch and lead us on into the brightest possible future.

Just 23% of U.S. eighth-graders are “proficient” or above in knowledge of American civics, according to the “Nation’s Report Card,” released this week by the National Assessment of Educational Progress (NAEP).

Only one-third know that “the United States government should be a democracy.”

For a nation governed by the people, for the people, this news is deeply troubling. Democracy takes work. It requires knowledge, interest, and vigilance from its citizens to remain healthy. If less than a quarter of young people meet only baseline standards of proficiency, and two-thirds are unable to identify America as a democracy, the future looks bleak.

But is it any wonder that U.S. students are struggling in social studies? The curriculum rarely engages them. A 2010 study out of the University of Central Florida found that 74% of middle school students report that they dislike social studies class due to the emphasis on reading from the textbook, rote memorization, and note-taking.

Meanwhile, the NAEP report tells us that reading textbooks, listening to lectures, and filling out quizzes and worksheets remain by far the most common teaching techniques used in U.S. social studies classrooms.

Democracy, by its very nature, is participatory. Shouldn’t our children learn civics the same way they will someday practice it?

A proven method for filling that gap is competitive debate. Numerous university studies have demonstrated that debaters out-perform their peers by nearly every conceivable measure, including grades, test scores, reading level, critical thinking skills, understanding of controversial issues, and enthusiasm for learning.

Unfortunately, only 17% of middle school children are ever given the opportunity to “take part in debates or panel discussions” in their social studies classrooms, according to NAEP.

Through its Debate Central program, the National Center for Policy Analysis aims to change that. Debate Central provides teachers and students with the resources necessary to launch new debate programs, as well as to sustain existing ones, all at no charge.

Every day, more than 2,200 American students visit the Debate Central website for research tips, starter packets for each new topic, individualized feedback, and more. Everything Debate Central does is completely free for all teachers, students, or anyone else who might be interested.

Educators interested in setting up new debate programs at their schools can also get one-on-one guidance from Debate Central’s full-time staff.

In debate programs, students are asked to research a given topic, which changes regularly and deals with subjects like current events, law, government, public policy, political philosophy, and values. Participants must prepare arguments in support of both sides, and will take turns advocating for each.

Make no mistake – these students’ engagement with their topics is not superficial. Most debaters spend multiple hours every day researching new ideas and refining their strategies. It is often said that the average debater will do the research equivalent of a Master’s thesis in every year they compete.

Most importantly, participation in debate inspires students to become personally invested in these subjects. Students are encouraged to pursue whatever ideas interest them, and to do so on their own terms. While one student may discover that she loves discussing issues from an economic lens, another may decide to approach the topic from the standpoint of realist international relations, or racial equality, or even philosophy of ethics. No matter what they choose, they will encounter opponents who have a different take. This means every student is actively teaching and learning from every other student, rather than sitting bored in a lecture.

Moreover, because they are competing head-to-head with their peers, they are driven to work hard, and wind up having a lot of fun in the process.

Because they are forced to switch between sides, debaters learn the strengths and weaknesses of all points of view, and resultantly become both more tolerant of difference and stronger advocates for their own beliefs. This sets them up for a lifetime of participation as an ideal democratic citizen.

America requires an informed and engaged populace in order to continue to be the world’s greatest democracy. By demanding and supporting debate programs in your local schools, you can help ensure the next generation will be ready to accept the torch and lead us on into the brightest possible future.

Rachel Stevens is the Youth Programs Director for the National Center for Policy Analysis.

Debate Central, an effort by the National Center for Policy Analysis, aims to provide free, high-quality resources to high school debate students, in cooperation with the University of Texas at Dallas. For more information, please visit http://debate-central.ncpa.org/

The National Center for Policy Analysis (NCPA) is a nonprofit, nonpartisan public policy research organization, established in 1983. We bring together the best and brightest minds to tackle the country's most difficult public policy problems — in health care, taxes, retirement, education, energy and the environment. Visit our website today for more information.