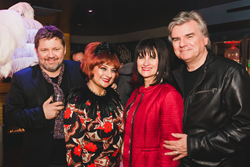 It was another hugely successful series of BritWeek™ events held at the uniquely urbane Hotel Shangri-la at The Ocean in Santa Monica. The select signature program hosted by Tamie Adaya brought the crème de la crème of British talent and creativity as well showcasing her own curative eye and impeccable sense of aesthetics.

At this year’s most sought after events, Tamie welcomed the U.K.’s a cornucopia of talent encompassing fashion, modeling, jewelry and design to the hotel with an afternoon ‘Village Fête' themed tea party and fashion showcase by Piers Atkinson and Zandra Rhodes, an exclusive penthouse soiree co-hosted by James Perkins, owner of the 17th Century Palladian Aynhoe Park in Oxfordshire, and an intimate DJ party on Hotel Shangri-la's rooftop with British models/entrepreneurs Felicity Hayward and Harriet Verney.

"BritWeek is the perfect vehicle for my work as an arts patron. I sponsored the bold talents of Piers Atkinson, Harriet Verney and Felicity Hayward to showcase British innovation and creativity at its most electrifying,” said Tamie Adaya, art patron, social architect and owner of the Hotel Shangri-la at The Ocean.

“It was also an absolute honor to co-host events with legendary fashion designer Zandra Rhodes, Milliner Piers Atkinson, Models Harriet Verney and Felicity Hayward and owner of Aynhoe Park, James Perkins. This dazzling line-up ensured my BritWeek 2015 festivities exhibited the dynamism that lies at the heart of British Style Genius. It’s exhilarating to be able to present the sceptered isles’ innovation and artistic excellence to the U.S. right here in the heart of Santa Monica,” she added.

At the intimate whisky-mixer soiree co-hosted by Tamie and James Perkins, the entertaining evening was filled with drinks, wit and repartee to discover the magic of the Modern Grand Tour of Aynhoe Park refined by his 25 years of adventuring, antique collecting and art curation. Aynhoe has long been a well-kept secret of the sartorial set.

Unrivaled panoramic views from Hotel Shangri-la’s Suite 700 rooftop bar seduced invited guests at the informal DJ party hosted by British models/entrepreneurs Felicity Hayward and Harriet Verney. A blond bombshell, Felicity Hayward was scouted to model for photographer Miles Aldridge. After this shoot was published by Ponystep Magazine in 2012, Felicity was approached by Storm Management and started her superstar modeling career. British writer and DJ Harriet Verney is the niece of fashion icon Isabella Blow, from whom she is said to have inherited her inimitable flair for style.

Last Sunday’s poolside afternoon ‘Village Fête’ themed tea party in the hotel’s garden courtyard showcased some of Britain’s best loved childhood playground games including Guess the Weight of the Cake, Penny Up The Wall and schoolyard favorite, Hopscotch. A definite show stopper taking center-stage was the hat and headpiece showcase from one of Britain’s leading milliners, Piers Atkinson, with flowing couture printed chiffon outfits from celebrated iconic fashion designer Dame Zandra Rhodes. Rhodes has dressed Jackie Onassis and Elizabeth Taylor, and has been recognized and made a Dame of the British Empire by the Princess Royal at a ceremony in Buckingham Palace. It was pure decadence with an afternoon of fashion and entertainment.

As a student of art, history, pop-culture, and politics, Tamie Adaya brings a distinctive viewpoint to her iconic Santa Monica boutique hotel property. Long a family treasure, the recently re-branded and remodeled Hotel Shangri-La is a reflection of Tamie’s palate—featuring clean, crisp lines, modern lifestyle amenities with a classic flair, an unprecedented attention to detail with a whimsical unpredictability that makes each visit a discovery in self-expression, escapism and pure enjoyment.

An avid traveler and student of modern-day life, Tamie is constantly seeking inspiration from other great cities, famous hotels, famed restaurants and museums, but has also found there is no greater way to be inspired than by bringing diverse and interesting people together at her hotel. From international DJs to writers, professors, photographers, and celebrities like famed British magician Dynamo who recently filmed an episode of his hit BBC One series, Magician Impossible at the hotel, to just close friends, Tamie often brings her diverse group of friends and associates together for a night of intellectual chat ranging from politics to fashion to the current state of the music industry. A sneak preview screening of PBS’ MASTERPIECE CLASSIC Season 2 premiere of the popular British series, ‘Mr. Selfridge,’ was held at the hotel. Visit http://www.tamieadaya.com/about/ to learn more.

The original and urbane Hotel Shangri-la at The Ocean in Santa Monica is anything but ordinary and a member of Small Luxury Hotels of the World. Overlooking the Pacific since 1939, the hotel is a striking beacon of Art Deco elegance, a chronicle of the golden era of Hollywood and a quintessential nexus of culture. Hidden away on a high Santa Monica bluff overlooking the ocean and historic Santa Monica Pier, this timeless luxury boutique hotel promises guests their own personal Shangrila. Guests enjoy brilliant views of the Pacific Ocean, a celebrated history and a cultural connection during their stay. In the U.S., for toll-free room reservations only, please call (800) 345-STAY (7829) or for more information, visit http://www.Shangrila-Hotel.com.

Tamie Adaya and Waris Habibullah, creator of Dr. Who

Ashley, Soki Mak, Will Vaughn and Charlotte at Hotel Shangri-la for BritWeek

Hotel Shangri-la at The Ocean in Santa Monica