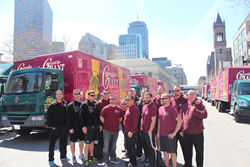 I have personally taken every employee at our new warehouse in Newton to run the Harvard Stadium, and these Giants are primed to give families throughout the area the service they deserve.

Gentle Giant Moving Company, an award winning residential and commercial mover founded in Massachusetts 35 years ago, announced today that it has opened a new Boston moving branch location in Newton. The warehouse and office space is strategically located, and will provide improved access to Gentle Giant’s expanding customer base within this community. Gentle Giant began a local and then national expansion in the early '90s with the people of Newton and surrounding affluent neighborhoods like Brookline, Cambridge, and Boston. The still independently owned full service moving company now operates over 20 offices in major cities across the country.

The company will dispatch several crews and vehicles daily from the new location in Newton, and will be supported by the company’s national headquarters, located in Somerville, MA. Gentle Giant built its reputation in Massachusetts by hiring college athletes committed to changing the moving industry by providing unprecedented levels of customer service. Part of this was achieved by sprinting with boxes and furniture to complete the move as fast possible for the customer. This still exists today.

“I have personally taken every employee at our new warehouse in Newton to run the Harvard Stadium, and these Giants are primed to give families throughout the area the service they deserve,” Gentle Giant Founder and CEO Larry O’Toole said. Gentle Giant has an acclaimed record of customer service, and has been awarded an Angie’s List Super Service Provider Award multiple times.

Operations of this warehouse will be supervised by Manager Gary Newman, a veteran of both Gentle Giant and high end moves in every corner of Massachusetts. Newman started at Gentle Giant over a decade ago, and has a long of history of mentorship, leadership, and customer satisfaction. Moves performed by Gentle Giant in Newton, or anywhere else across the country, can be booked today by either calling 800-GIANT-MEN or visiting http://www.GentleGiant.com