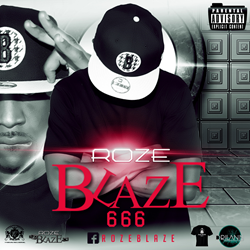 On "666" RozeBlaze teams up with fellow Brooklynite Mordaki (Dark World Music) for most of the project.

"Well, I'm from Brooklyn, my name is RozeBlaze, my momma is Naydene, and they call my daddy Che. They both got high, sniffed yay; that's why I turned out this way..." he quips on the classic Fat Boys influenced track "Stick Em".

Keep up to date with RozeBlaze on Twitter at: @rozeblaze