An investment advisor with decades of experience urges new ways of thinking about the national government and deficit spending in this new book released by Dog Ear Publishing. 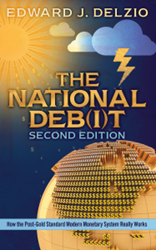 “(The author) calls for diversity of thought about monetary policy, writing that it is just as valuable as diversity in investments, especially when it comes to the subject of the national debt.

(PRWEB) May 11, 2015 -- The U.S. federal government’s monetary system has changed from being a user of dollars backed by gold to becoming an issuer of dollars not backed by gold, completely transforming how federal government deficit spending functions. Edward Delzio, a financial expert with more than 30 years of experience, details how the system now works in his new book, released by Dog Ear Publishing. Treasury bonds have an even more important role in that system, he writes, whether used in monetary policy to set the price of dollars or the interest rate and to help fiscal policy to boost the economy. That is just one example of how thinking needs to change regarding the nation’s finances.

“The National Deb(i)t: How the Post-Gold Standard Modern Monetary System Really Works” offers insights on Treasury bonds, modern monetary theory, printing money, the debt ceiling and national debt. For instance, Delzio writes, since leaving the gold standard, the federal government now taxes its residents and businesses to regulate economic aggregate demand, not to finance spending. With its monopoly of control over dollars, the Federal Reserve Bank routinely swaps dollars for assets, acting as the banking agent for the federal government.

Federal government’s spending does not just revolve on federal taxes and borrowing, leading to a spending limit – far from it. In a national economy, mass consumption and mass production must work together, and once that happens, federal deficit spending can begin to move toward balance. Above all, Delzio calls for diversity of thought about monetary policy, writing that it is just as valuable as diversity in investments, especially when it comes to the subject of the national debt.

Author Edward Delzio serves as an investment advisor representative with Primerica Advisors in Westchester County, New York. He spent nearly 30 years as a Treasury bond broker at RMJ, Cantor Fitzgerald, and eSpeed, splitting his time between offices in New York City and Tokyo. Delzio began his career with an entry-level job on Wall Street for RMJ Securities, a U.S. Treasury bond brokerage firm, after graduating from Wilkes College (now Wilkes University) in Wilkes-Barre, Pa. He was born and raised in northern New Jersey. He and his wife, Yukiko, live in Westchester County.