A Baltimore County jury has awarded a Woodlawn family $2 million after it was determined that their OB-GYN’s failure to identify their daughter would be born premature led to the girl’s cerebral palsy. 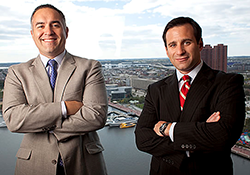 The award announced for Muhammad and Fatima Abid on behalf of their daughter, Maria, against Dr. Meera A. Rawtani includes $1.5 million in future medical expenses and $350,000 in noneconomic damages, according to one of the plaintiffs’ lawyers.

The award announced for Muhammad and Fatima Abid on behalf of their daughter, Maria, against Dr. Meera A. Rawtani includes $1.5 million in future medical expenses and $350,000 in noneconomic damages, according to one of the plaintiffs’ lawyers.

On April 19, 2006, a day after her water broke prematurely; Fatima Abid was admitted to St. Joseph Medical Center, according to the complaint. While Abid was only 33 weeks pregnant at the time, her doctors believed she was more than 36 weeks pregnant, according to Alicia J. Gipe, one of the plaintiffs’ lawyers.

An ultrasound that had been performed 12 days earlier “clearly demonstrated” Maria was premature, according to the lawsuit, filed in November 2013 in Baltimore County Circuit Court.

The jury of six women found Rawtani failed to inform the Abids that there might have been a “miscalculation” on the gestation, said Gipe, an associate with Gilman & Bedigian LLC in Timonium. It was also alleged that the staff at St. Joseph also failed to give steroids to Maria to increase her lung capacity. Once these steroids are administered, the fetus should remain in utero for another week.

Maria was diagnosed with under-developed lungs and respiratory problems after being taken to the neonatal intensive care unit after she was born. The neonatologist determined Maria was delivered at 33 weeks, and a delivery room doctor later called “to inform the NICU staff that Maria was mistakenly delivered prematurely,” the complaint states.

During the 10-day trial before Judge Michael J. Finifter, evidence was shown that proved Maria’s medical records were change “after the fact” to show she was fully developed when she was born, according to Gipe.

Maria, now 9 years old, is "a sweet girl who had a devastating injury," Gipe said. The Abids were relieved when the jury announced its verdict after two hours of deliberations, she added.

“A woman has a right to control her body and the medical decisions that are made, and in this case the right was taken away from her,” said Gipe.

The legal team at Gilman & Bedigian, LLC has an excellent reputation as dedicated and successful trial attorneys, helping malpractice and personal injury victims recover losses sustained from their injuries. Alicia Gipe focuses her practice in personal injury matters including automobile accidents, slip and fall accidents, catastrophic injuries, medical malpractice, and premises liability matters. H. Briggs Bedigian is a partner with Gilman & Bedigian, LLC. Prior to co-founding the firm, he was a partner at Wais, Vogelstein and Bedigian, LLC where he was the head of the litigation practice. Briggs’ practice remains focused on representing clients involved in complex medical malpractice and catastrophic personal injury cases in the Baltimore, Washington, D.C., and Philadelphia area.

For questions and/or additional information, please contact Charles A. Gilman, Esquire at cgilman(at)gblegalteam(dot)com