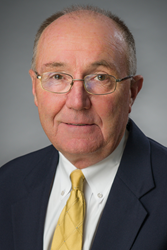 Jack McDonald is the consummate builder. He brings to UNE, Maine's largest private university, his experience, enthusiasm and energy to build our growing athletics program.

President Ripich said, “Jack McDonald is the consummate builder. He brings to UNE, Maine's largest private university, his experience, enthusiasm and energy to build our growing athletics program. We all welcome him and a new era of leadership for our athletics program.”

In making the announcement, President Ripich ended a nationwide search lasting several months. She acknowledged that UNE had numerous qualified candidates, noting that the search was an intense process, but that McDonald brought the right combination of history and passion about athletics to the position.

Ripich said, “Jack’s record really speaks for itself. As UNE continues to grow its program, his history of stewardship around athletics will be a significant contribution.”

Jack McDonald comes to UNE from NCAA Division I Quinnipiac University, where he served as the Bobcats’ director of athletics for 20 years. While at Quinnipiac, McDonald was instrumental in the Bobcats making the transition from being a NCAA Division II institution to its current status as a Division I member.

McDonald said he is excited to lead the accomplished Nor’easters’ athletics program. “I look forward to assisting President Ripich, John Tumiel and the entire Athletics staff at the University of New England,” he stated. “UNE is a beautiful campus with outstanding leadership, excellent programs and facilities. I would also like to sincerely thank Quinnipiac’s President John Lahey, Mark Thompson and the Athletics and Recreation staff for 20 perfect years.”

Quinnipiac won 29 conference championships during McDonald’s tenure and had its most successful sports season in 2012-13 when the Bobcats garnered four conference titles, seeing three teams advance to Final Fours. He also successfully gained conference membership for Quinnipiac to the Metro Atlantic Athletics Conference as well as to ECAC Hockey for both the men’s and women’s ice hockey programs.

McDonald also played an integral role in the design, construction and dedication of the TD Bank Sports Center—a 160,000 square foot state-of-the-art facility that has separate venues for Quinnipiac’s basketball and ice hockey programs.

Prior to his tenure at Quinnipiac, McDonald was director of athletics at the University of Denver (1990-95) and assistant athletic director for marketing at Boston College (1987-90). A 1973 graduate of Boston College, McDonald competed in and coached track. He was a four-time New England champion and set the New England indoor mile record (4:00.9) in 1976.

McDonald, a native of Braintree, Mass., is the oldest of 11 children. He and his wife, Linda, have four adult sons: Brian, Jim, Jack and David.

About UNE
The University of New England (UNE) is an innovative health sciences university grounded in the liberal arts. It has two distinctive coastal Maine campuses and a vibrant campus in Tangier, Morocco. With internationally recognized scholars in the sciences, health, medicine and the humanities, UNE offers more than 40 undergraduate, graduate and professional degree programs, and is home to Maine’s only medical and dental schools. It is one of a select group of private universities with a comprehensive health education mission that includes medicine, pharmacy, dental medicine, nursing and an array of allied health professions. Visit http://www.une.edu.
###