Joy Elan, an accomplished writer and poet shares hard-hitting and eye-opening views of lessons she learned, and that which she came to appreciate about the African American experience in her third thought-provoking book "INSTITUTIONAL FREEDOM: A Collection of African American Studies Essays." 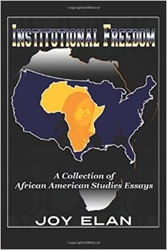 We have an African American president who is himself not protected from threats, and whose family is persistently at risk. In some ways, it feels like it is 1915 instead of 2015.

Today, Joy Elan, a life-long San Francisco Bay Area resident, announced the publication of her third literary offering titled "INSTITUTIONAL FREEDOM." In the book, Elan publishes 21 compelling essays written while she was an African American Studies major at U.C. Berkeley. The book is a collection of her favorite and best in-depth papers that revolved around African American life and culture in the United States. Written between the ages of 17 and 21, her evolving writings are opinion; not fact. The topics range from family and education to gender, law and politics.

"INSTITUTIONAL FREEDOM" is the voice through which Elan shares critical academic learnings that highly influenced the woman she has become—a decidedly passionate, sensitive and expressive writer, loving mother, teacher and voice for change. Elan presents this book to her readers to demonstrate how to think outside the box about African American history, and older unresolved and contemporary race-related issues.

Assertive, hard-hitting, authentic, thought-provoking, genuine and motivating are how Elan's essays are rendered. "I thought a lot, wrote a great deal and shared a host of critical ideas in my essays. This book is my way of sharing that which I learned at the universities, and contributed to literature in these fields. I am hoping that people will come to see and understand the academic side of me," said the author.

AMONG BOOK'S CHAPTER/ESSAY TITLES:
Teena Marie and Her Success in Black Music; The Confrontations within the Free; African American Community; Black Authenticity; African American Studies as a Discipline and a Department; The Roles of African American Women; The Negative Representations of Blacks on Television; Black Leaders and Where Are They?; Class and How it Affects the Family.

HAVE WE PROGRESSED?
"African Americans have progressed with advancement in higher education and various career fields. However, our civil rights are being violated every day, as if the Civil Rights Movement has not helped eliminate racial barriers. We are not being selected in some career fields due to our Afro centric appearances and we are still targeted on college campuses and in the work force. We have an African American president who is himself not protected from threats, and whose family is persistently at risk. In some ways, it feels like it is 1915 instead of 2015.

Gentrification is happening all over the urban neighborhoods and forcing us to move to where housing is affordable. It is the reverse of the "White Flight" in the 1950s and 1960s. This is why this book is so important. Issues that I studied about happening in another time seem to have made a comeback. Racism is becoming more blatant and seemingly tolerated. Police cases in courts are being dropped when unarmed African Americans are being killed. It is almost like the movie "Rosewood," where we have to be careful what we do or say so that we are not targeted or seen as a threat to law enforcement. I am worried about where we are going in regards to racial barriers and equality." -- Joy Elan, the author

ABOUT THE AUTHOR:
Born with a hearing impairment, Joy Elan has required hearing aids since the age of 15 months.1 Her hearing loss was attributed to oxygen deprivation caused by the umbilical cord wrapped around her neck at birth. Now, a single mother of a pretty and gifted little 7-year-old daughter, Elan was born in Berkeley, CA in July 1983—to a mother who was herself single—and raised in neighboring Oakland, CA where she attended a Deaf/Hard of Hearing program in the Oakland Unified School District (OUSD).

Despite her hearing loss, Elan excelled in school and was mainstreamed into a regular classroom. From an early age, Elan's hardworking mother filled her with encouragement, assisted her academics, and worked with her on her speech. Her mother moved them from the Oakland Unified School District—where little support was provided during her latter grade school years—back to Berkeley. The Berkeley Unified School District granted Elan all of the necessary accommodations outlined in the Individualized Education Program (IEP). She continued to the middle school and high school fully mainstreamed with American Sign Language (ASL), and graduated from Berkeley High School one semester early.

In just three years, Elan obtained her undergraduate degree from University of California, Berkeley in African American Studies, then proceeded to earn her Master's Degree in Education from Stanford University, graduating with a stellar 3.67 GPA.

"INSTITUTIONAL FREEDOM: A Collection of African American Studies Essays" is Joy Elan's third published body of work. It was preceded by the well-received books of poetry: "SIGNS OF LIFE: Past, Present and Future" (July 2011), and "SILENCE IS NOT ALWAYS GOLDEN: A Poetic Revolution" (June 2013).

Elan performs poetry live at venues throughout the San Francisco Bay Area. To learn more about Elan's story, her performances and her books, visit http://www.authorjoyelan.com. She may be reached directly at authorjoyelan(at)gmail.com.

Hearing appliances are not covered by medical insurances or Medicare. Though hearing screenings and medical application for hearing health is covered under the Patient Protection and Affordable Care Act (Obamacare), hearing aids are not required to be covered. 1 hearpo.tumblr.com/post/34671196216/obamacare

EDITORS:
A device aids Joy Elan's hearing, and her diction is sufficiently clear to give intelligible and fascinating broadcast interviews. To arrange in-person or telephone interviews with Ms. Elan, contact Toni Beckham | 209-832-8020