Fox, an alumna, currently stars in the hit Japanese TV drama, “Massan” and this Fall will appear on Broadway. 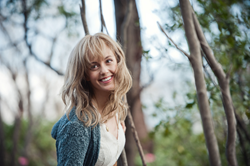 Charlotte Kate Fox, an alumna and star of hit Japanese drama "Massan", will deliver the commencement address at SFUAD on May 16.

The training I received at the university was invaluable. It instilled the necessary foundation of the craft (acting), as well as a deep love and respect for the artistry and magic of storytelling.

Santa Fe University of Art and Design (SFUAD) announced today that American actress and singer/songwriter Charlotte Kate Fox, an alumna (’08), will deliver the 2015 commencement address. Fox will also receive an honorary degree from the university during the ceremony, which will be held at 10 a.m. on Saturday, May 16 at the Rosemarie Shellaberger Tennis Center. In addition to Fox’s address, the graduation program will feature student speaker Lucy Madeline (’15, Studio Arts) as well as musical performances by the University Chorus and Performing Arts Department graduates. The class of 2015 celebrates 125 students who have completed or will complete their degree requirements between December 2014 and May 2015.

“We congratulate the class of 2015 in their achievements at Santa Fe University of Art and Design and their future success as creative professionals,” says Larry Hinz, president of Santa Fe University of Art and Design. “We are likewise just as excited to welcome an alumna back to campus. Charlotte Kate Fox embodies all that we hope our graduates can achieve with their talent, passion and perseverance.”

Fox, a Santa Fe native and alumna who earned her bachelor of fine arts in theatre from College of Santa Fe (now SFUAD), went on to earn her masters in acting from Northern Illinois University. Today, she divides her time between Atlanta, New York City and Tokyo, where in 2014 she made history when she was cast as the first foreign lead of the NHK Japanese morning drama “Massan.”

In addition to her current role on “Massan,” Fox has appeared in regional professional theatre across the U.S. as well as independent films. She says she remains passionate about educating and inspiring young artists to "think outside of their country, culture, and language" in order to promote cross-cultural communication and work towards a deeper understanding of artistry.

“The training I received at the university was invaluable,” says Fox. “It instilled the necessary foundation of the craft (acting), as well as a deep love and respect for the artistry and magic of storytelling. As Santa Fe itself is such a magical place, the university, in turn, attracts unique, and eclectic like-minded professionals, that had (and have) the ability to inspire students in a way unlike any other. It truly was an experience I have yet to find the world around.”

In July, Fox will begin filming a made-for-television movie, and is also currently recording an album produced by American artist "KishiBashi" to be released in August of 2015. This Fall, Fox will appear on Broadway as "Roxie" in the long-running musical, "Chicago." She continues to be involved in several non-profits and charities including Save the Children, UNICEF, and The United Nations Refugee Agency.

About Santa Fe University of Art and Design:

Santa Fe University of Art and Design is an accredited institution located in Santa Fe, New Mexico, one of the world’s leading centers for art and design. The university offers degrees in arts management, contemporary music, creative writing, digital arts, graphic design, film, performing arts, photography and studio art. Faculty members are practicing artists who teach students in small groups, following a unique interdisciplinary curriculum that combines hands-on experience with core theory and prepares graduates to become well-rounded, creative, problem-solving professionals. SFUAD is a member of the Laureate International Universities network – a global network of more than 80 campus-based and online universities in 29 countries. SFUAD boasts an international student body and opportunities to study abroad, encouraging students to develop a global perspective on the arts. Santa Fe University of Art and Design is accredited by The Higher Learning Commission.