Dr. Yukio Hatoyama, prime minister of Japan in 2009–2010, will deliver the Maharishi University of Management commencement address on May 23 and will be awarded an honorary degree of Doctor of Laws. 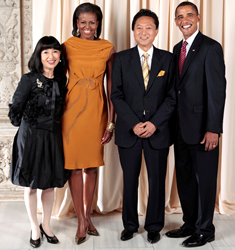 US President Barack and Mrs. Obama with Japan PM Yukio and Mrs. Hatoyama

“It is an enormous honor to have a former prime minister of Japan speak at our graduation ceremony,” said MUM President Dr. Bevan Morris in making the announcement.

Dr. Yukio Hatoyama, prime minister of Japan in 2009–2010, will deliver the commencement address on May 23 and will be awarded an honorary degree of Doctor of Laws.

“It is an enormous honor to have a former prime minister of Japan speak at our graduation ceremony,” said MUM President Dr. Bevan Morris in making the announcement.

A record number of 391 students, representing 61 different countries, will be graduating at the 2015 commencement ceremony at Maharishi University of Management.

He was instrumental in forming two political parties in Japan and was credited by Time magazine with helping Japan take steps toward a multi-party system after decades of single-party government under the Liberal Democratic Party. He became president of the Democratic Party of Japan in 2009 and led the party to an electoral victory.

MUM President Morris met Dr. Hatoyama in Tokyo when he visited Japan in November 2013 and found him to be a “man of remarkable warmth and sweetness, and fascinated by Consciousness-Based education and by Maharishi University of Management.”

The Hatoyamas plan to spend time in the community while they’re here to learn more about MUM, Maharishi School, Maharishi Vedic City, and Fairfield.

Member of a distinguished Japanese family

Dr. Hatoyama is a member of a distinguished Japanese family that has a long history of government service. His great-grandfather was the speaker of the House of Representatives in Japan’s legislature in the late 19th century. His grandfather was prime minister of Japan in the 1950s and helped secure membership in the United Nations for Japan. His father was Japan’s foreign minister. His younger brother served as Minister of Internal Affairs and Communications.

His family also has a long history in higher education. His great-grandfather, after stepping down from government service, became president of Waseda University, and his great grandmother co-founded Kyoritsu Women’s University.

His political career began in 1986, when he was elected to the House of Representatives. He was elected prime minister in 2009, and despite his relatively short time in office, he has a long list of achievements, including greater spending on education and student scholarships and free support services for people with disabilities. Under his leadership, Japanese relations with China became more cordial.

The graduating students include 96 undergraduates and 252 graduate students. Also receiving degrees will be 43 students at Maharishi Invincibility Institute in South Africa who have been enrolled in MUM’s BA in business and MBA programs via distance education.

If you cannot attend the event, it will be live-streamed over the web at https://livestream.com/mum/graduation2015.

About Maharishi University of Management

Maharishi University of Management (MUM) in Fairfield, IA is a private, accredited university featuring Consciousness-Based℠ education, designed to develop the student’s total potential. The curriculum offers bachelor’s, master’s, and doctoral degrees in the arts, sciences, humanities, and business, but also integrates self-development programs. All students, faculty, and staff practice the Transcendental Meditation® technique, which develops integrated brain functioning, promotes wellness, and enhances learning ability and academic performance. Other innovations include taking one course for 3-1/2 weeks with a three-day break between each course, and organic vegetarian meals. Visitors Weekends are held throughout the year. For more information, call the Admissions Office at 800-369-6480 or visit http://www.mum.edu.