Independent film director Josh Funk has won a prestigious Award of Excellence from The IndieFEST Film Awards for his stop-motion and live-action sci-fi adventure film The Spaceman. 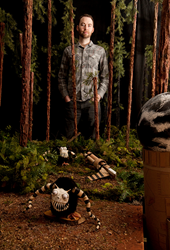 Director Josh Funk on the stop-motion set of The Spaceman.

“I made The Spaceman to relive my childhood experience of building spaceships out of cardboard.

Independent film director Josh Funk has won a prestigious Award of Excellence from The IndieFEST Film Awards. The award was given for Funk’s exciting sci-fi short film The Spaceman, which was partially funded through Kickstarter.

The Spaceman features an exceptional use of practical effects such as stop-motion animation, miniatures, animatronics, and elaborate sets made of cardboard. The film stars Funk’s brother Jordan Funk, who builds a cardboard spaceship, travels to an alien planet, and fights a stop-motion monster. This black and white short was filmed in the Northern California locations of Chico, Forest Ranch, and Fern Canyon.

“I made The Spaceman to relive my childhood experience of building spaceships out of cardboard. I am so honored to win this award and excited to share my quirky creation to a larger audience,” said Funk.

In winning an IndieFEST Film Award, Josh Funk joins the ranks of other high-profile winners of this internationally respected award including Liam Neeson as the narrator of Love Thy Nature, Julia Louis-Dreyfus and Tom Hall for Generosity of Eye, searing expose Davids and Goliath by Leon Lee and European heavyweight Roland Joffee for The Lovers starring Josh Hartnett and Bollywood star Bipasha Basu.

Rick Prickett, who chairs The IndieFEST Film Awards, had this to say about the latest winners, “The IndieFEST is not an easy award to win. Entries are received from around the world from powerhouse companies to remarkable new talent. The IndieFEST helps set the standard for craft and creativity. The judges were pleased with the exceptional high quality of entries. The goal of The IndieFEST Film Awards is to help winners achieve the recognition they deserve.”

A stop-motion monster from Josh Funk's The Spaceman.