When composing short stories for 'Almost Grown,' Lindsay reached back to his teen thinking, while also recalling the tangled web of parenting three daughter's through their 'almost grown' years. 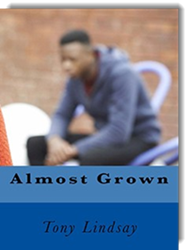 I would describe the book as thought provoking for teens. It draws empathy, causing teens to put themselves in the protagonist's (character's) shoes.

Widely published author Tony Lindsay proudly announced today the publication of his eighth fictional literary offering titled 'Almost Grown.' The book is a collection of 15 short stories with teen and young adult main characters. These young characters live ordinary day-to-day lives with unexpected twists, and there are no “super” adults saving them; they must work through some of the pitfalls and obstacles that are growing-up inevitables.

The reader journeys through bad decisions made better, and young people realizing that it is OK not to be right, or the best all the time. Being 'almost grown' is a super challenging place to be, but these stories depict the pleasures of that stage of life when the only jobs that young people have are to: study hard in school; obey and respect their parents and have fun.

When composing short stories for 'Almost Grown,' Lindsay reached back to his teen thinking, while also recalling the tangled web of parenting three daughter's through their 'almost grown' years. "I would describe the book as thought provoking for teens," said Lindsay. "It draws empathy, causing teens to put themselves in the protagonist's (character's) shoes." Teens and young adults love Lindsay's writings because they recognize their own 'almost grown' situations and dilemmas. Short stories are easy to read and hold young peoples' attention. If parents want their youth to read more often, they are encouraged to consider 'Almost Grown' for gift giving occasions. Young recipients will be delighted.

About the Author:
Tony Lindsay is the industrious author of seven prior novels, including several adult reads and another young adult short story collection, 'Fat from Papa’s Head.'

An avid writer of many genres, Lindsay has published book critiques and reviews for Black Issue’s Book Review. He contributed to the anthologies 'Don't Hate the Game,' 'Lucious' and 'Fire and Desire.' He has also contributed to the on-line encyclopedia Identity.com, and Mosiac.com. Lindsay has been published by to the African American literary website 'Timbooktu.com,' as well as the young adult magazine Cicada. He pens bimonthly articles for Conversations magazine, and he writes non-fiction book reviews for Hartman Publishing’s N’DIGO Magapaper.

Lindsay earned his Bachelors Degree in Psychology from the University of Illinois – Chicago and a Master in Fine Arts Degree (MFA) in Creative Writing from Chicago State University. He currently teaches at South Suburban College in South Holland, IL. Tony Lindsay resides in Chicago with his wife of more than 30 years.