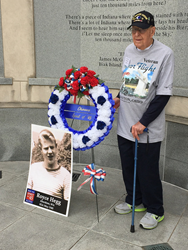 For every soldier lost there is a mother who is broken hearted. America must never forget their sacrifice"

The sound of "Taps" echoed across the Indiana War Memorial Plaza in Indianapolis on Sunday, May 17, as a group of veterans who fought in the Battle of Okinawa held a wreath laying ceremony to honor fallen comrades who died seventy years ago during the final battle of World War II.

More than 14,000 Americans and over 240,000 Japanese died during the 82 days of bitter fighting that began on Easter Sunday, April 1, 1945, and ended June 21, two months before atomic bombs were dropped on Hiroshima and Nagasaki.

The group was joined by fellow Okinawa vet, Dr. E. Bruce Heilman, 88, who embarked last month on a month long 6,000-mile motorcycle ride through 22 states to pay tribute to the Gold Star families of WWII and all eras. Heilman saw combat as a young Marine on Okinawa, and later served as part of the postwar Occupation of Japan.

"This Memorial Day is very important to me," said Heilman. "America must never forget those who made the ultimate sacrifice during WWII and all those in every generation who have given their lives in service to our country defending the freedoms that we too often take for granted."

"For every soldier lost there is a mother who is broken hearted," said Don Schauwecker who escorted Heilman to Indianapolis from Chicago with his wife Janice. Their son, Staff Sgt. Richard Blakely, was killed in Iraq in June 2006, just weeks after Indiana Governor Mitch Daniels presented him with a Purple Heart for wounds from sniper fire.

Heilman, who has served as the chancellor of the University of Richmond for the past 30 years, will continue his ride to Washington, DC this week where he will appear as a Grand Marshal in the nation's largest Memorial Day parade on May 25.

He will be joined by hundreds of youth volunteers carrying poster size photos of some of the 400,000 Americans who died in WWII, including that of 19-year old Army Pfc. Royce Maynard Christie Hegg, who was killed on May 17, 1945, who was honored during the ceremony in Indianapolis.

The ceremony was organized by Indy Honor Flight as part of a national grassroots campaign led by Keep the Spirit of '45 Alive, a grassroots coalition of organizations that are planning events and activities around the country to commemorate the 70th anniversary of the end of WWII on the weekend of August 14 - 16. http://www.Spiritof45.org

"We were honored to have this opportunity to pay tribute to our WWII veterans and our Gold Star families," said Carol Ford of Indy Honor Flight, which is one of more than 100 regional hubs across the country that taken more than 100,000 WWII veterans to visit their memorials in Washington, DC free of charge. http://www.IndyHonorFlight.org