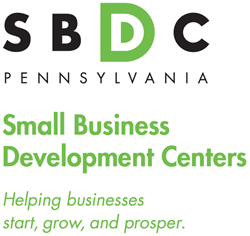 We salute these companies for their resiliency, dedication, and for their commitment to their local, regional, and state economies. -Christian Conroy, Pennsylvania SBDC State Director

“We salute these companies for their resiliency, dedication, and for their commitment to their local, regional, and state economies,” said Christian Conroy, Pennsylvania SBDC State Director. “I am especially pleased to recognize the six SBDCs who have worked with these businesses over the years to help them grow to the next level,” he added.

What began in 2007 by two cousins in a basement has now grown into a company that is grossing over half a million dollars in sales, operating in an expanded facility, growing to six employees. Founder David Burns said “When we opened neither of us had a strong business background so we sought help at the University of Pittsburgh’s Small Business Development Center. Upon meeting with our consultant and her team various problems within the business were revealed. The amount of help that I received is indescribable,” he added.

Working with the Duquesne University SBDC since 2012, CIMA Life Sciences has grown its sales and added employees through expansion into global markets. Founded in 1989, CIMA manufactures and distributes ophthalmic products for the international market. The company designs, manufactures, and distributes intraocular lenses, visco-surgical devices, and ophtamalic solutions for patients with cataracts or retinal diseases. Recently, the company moved into a new, state of the art manufacturing facility in Pittsburgh designed around the manufacture of cutting-edge intraocular lenses and viscoelastic solutions.

Jim and Colleen Small both had long careers in the grocery industry. As they approached retirement, they started looking for new opportunities. They explored many options, but one stood out—a franchise with The UPS Store. They opened The UPS Store #5642 in State College in 2005 and their store has grown year after year. 2013 revenues were 26 percent greater than they were just two years prior, and their total number of employees at the of the end of 2014 is double what it had been in 2011. They have utilized the services of the Penn State SBDC since 2006 and recently opened their second store in Altoona.

Talluto’s Authentic Italian Foods, Inc. was founded in 1967 by Joseph Talluto, who, at the age of 60 sold his house to buy a ravioli machine and pursue his dream of starting a business. Fast forward to 2001 when Talluto’s purchased a 50,000 square foot state of the art facility in Folcroft to handle its increased customer base which included major food service companies, retail grocery stores, delis, specialty food stores, and restaurants. After overcoming obstacles including loss of a major customer in 2006, the company has rebounded stronger than ever experiencing sales growth each year since 2011 thanks in part to the assistance of local organizations including the Widener University SBDC.

Founded in 2002, and a client of the Kutztown University SBDC since 2003, CMC was established to provided custom material processing and toll processing services. Over the years the business expanded to offer its own equipment division as well as a mulch colorant line that produces seven color variations with an annual volume of over 6 million pounds. The company began with three employees and now has 34 full time employees occupying more than 75,000 square feet of office, manufacturing, and warehousing space on a total of ten acres. Most recently in 2013, CMC purchased a controlling interest in a custom processing company in Brasil to break into the South American market using the same business plan that succeeded in the USA to grow their company even further.

Every year, SBA solicits nominations for high-impact small businesses as part of their National Small Business Week Awards. This year, the Pennsylvania SBDC network had six client businesses selected as award recipients who join the national list of outstanding entrepreneurs and small business owners representing all 50 states and U.S. territories.

National Small Business Week is proclaimed by the President of the United States to recognize the critical contributions of America’s small businesses and entrepreneurs. This year, the week-long celebration ran May 4-8, 2015 with events held in multiple cities from coast-to-coast. To learn more, visit http://www.sba.gov/nsbw.

About Pennsylvania Small Business Development Centers (SBDC)
The Pennsylvania SBDC network is the only statewide, nationally accredited program that provides high quality one-on-one consulting, training and information resources to empower new and existing businesses. SBDC consultants work with entrepreneurs in confidential, individualized sessions to help them with a range of business issues including testing a new business proposition, shaping a business plan, investigating funding opportunities, and much more. The SBDC program is a public/private partnership with the U.S. Small Business Administration, the Pennsylvania Department of Community and Economic Development and 18 universities and colleges across the Commonwealth. For more information on the Pennsylvania SBDC services and impact, please visit http://www.pasbdc.org.