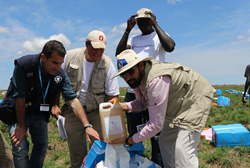 SkyLIFE is absolutely committed to bringing cutting edge technology to the humanitarian’s biggest challenge- delivery of aid over the last mile. SkyLIFE was founded to save lives, reduce suffering and provide hope. - Jeffrey Potter, CEO

SkyLIFE Technology in conjunction with the World Food Program (WFP), has successfully employed their groundbreaking aerial delivery system to airdrop critical food supplies in South Sudan. The airdrop, which took place in Ganyiel, South Sudan resulted in a 99% success rate of the World Food Program’s fortified vegetable oil (nicknamed, the “undroppables”). The new capability could enable the World Food Program (WFP) to consolidate their aerial deliveries and use their more cost effective IL-76 cargo airplane to deliver their more fragile payloads alongside bulk food. An initial analysis has shown that full implementation of the innovative delivery system could save WFP $14 million annually in operating costs in South Sudan.

South Sudan has long been one of the World Food Program’s most complex humanitarian aid operations. The country’s long rainy season, underdeveloped road infrastructure, and ongoing civil war has rendered traditional means of delivering aid virtually impossible for long parts of the year. As a consequence of less than favorable conditions, South Sudan is home to the WFP’s largest aerial humanitarian operation in the world.

As part of their operation, the WFP delivers bulk food to remote locations throughout South Sudan. As the roads are impassable for much of the year, the WFP charters both IL-76 cargo airplanes and Mi-8 helicopters to deliver food and supplies. While the IL-76 airplane has the capability to aerially deliver bulk foods such as 55kg bags of sorghum and maize, it is unable to airdrop the more fragile vegetable oil, which is necessary for the preparation of the sorghum and maize. To deliver these “undroppables,” the WFP has had to utilize more expensive and less efficient Mi-8 helicopters. SkyLIFE Technology which began working with the WFP in 2014, engineered specially designed boxes, parachutes, and absorption materials that may now enable the WFP to safely deliver the undroppable cooking oil using the more cost-efficient IL-76 airplane.

In a country where 2.5 million people are unsure of where their next meal will come from, the WFP's humanitarian operation has been essential for the survival of tens of thousands of people. The landmark airdrop could open the door for airdrops of other types of aid payloads and has to potential to redefine the relationship between humanitarian logistics and aerial delivery. SkyLIFE CEO Jeffrey Potter said, “SkyLIFE is absolutely committed to bringing cutting edge technology to the humanitarian’s biggest challenge- delivery of aid over the last mile. SkyLIFE was founded to save lives, reduce suffering and provide hope.”

About SkyLIFE Technology- SkyLIFE is a Toledo, OH based company that was born in aftermath of the Haitian earthquake where the severely damaged infrastructure prevented the timely arrival of disaster relief to victims. To prevent future loss of life in the event of similar disasters, SkyLIFE engineered two distinctly different, yet vital delivery systems for humanitarian relief operations. The first system consists of patented aerodynamic packets that can be dropped from virtually any type of aircraft – without having to land the aircraft or clear hazardous drop zones. The packets carry single servings of food, water, and/or first aid supplies and are dropped directly to those in need. The second system, their family of boxes called the “Undroppables,” allows both immediate disaster relief agencies as well as sustained humanitarian assistance operators to safely deliver (from either fixed-wing or rotary-wing) critical supplies in specially engineered box/parachute combinations.

Jugs of Oil Float to the Ground in Ganyiel, South Sudan