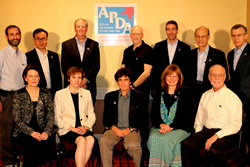 Earlier this month, the American Parkinson Disease Association (APDA) Scientific Advisory Board (SAB) met to review more than sixty-two submissions all vying for more than a half million dollars in funding that will be awarded to experienced and young scientists in the Parkinson’s field.

APDA is focused on advancing scientific research that will support its mission to Find a Cure for Parkinson’s disease (PD). APDA has been at the forefront in funding most of the Parkinson's scientific discoveries in the last 50 years including the work of Dr. George C. Cotzias, which led to establishing the effectiveness of high oral doses of Levodopa in treating PD; the work of Dr. Roger Duvoisin and his team that led to identifying the role of heredity and environment in PD; the research of Dr. Menek Goldstein establishing the role of dopamine agonists in PD treatment; and the research at Robert Wood Johnson Medical Center, which led to the discovery of a mutation in the gene alpha-Synuclein, named PARK1.

“What sets APDA apart is it’s track record of launching the careers of the best and brightest scientists working on Parkinson’s disease, and enabling exploration of new ideas for finding the cure," commented Dr. David G. Standaert, Chairman of the SAB.

APDA's SAB is comprised of scientists with recognized expertise relevant to PD and leading edge research areas. Research grants are awarded at $50,000 per year and are available to junior investigators pursuing research in Parkinson’s disease, while the Post-Doctoral Fellowships are awarded at the $35,000 level to support post-doctoral scientists whose research training holds promise into new insights of geriatric psychology, pathophysiology, etiology and treatment of Parkinson’s disease.

This critical research funding is only possible because of generous donations from APDA’s steadfast supporters. However, none of this work would come to pass without the dedicated work of the SAB who gather on a regular basis to diligently review and recommend the most cutting edge research.

The SAB meeting also included research updates from four of the seven 2014-2015 junior investigators who each represent a vast diversity of research areas that can impact the treatment of PD.

Samuel A. Frank, MD, of Boston University is researching the question of mortality in Parkinson disease recognizing that the precise cause of death among people with the disease remains controversial. While at Washington University in St Louis, PhD researcher, Jinbin Xu is focused on develop imaging probes to visualize different aspects of neuroinflammation for PD diagnosis and therapy efficacy evaluation. Cristina Guardia Laguarta, PhD, from Columbia University seeks to determine the exact localization of alpha-synuclein (α-syn) inside the cell to support the hypothesis that familial Parkinson’s disease may be due to overexpression of α-syn or its mutation. Finally, studying neuroprotective approaches to protecting or restoring the brain in PD, Dr. Daniel Lawrence from the University of Michigan is looking at the role that regulation of neurovascular responses play in the brain.

The announcement of 2015-2016 grant funding will take place in August.

About the American Parkinson Disease Association
APDA was founded in 1961 with the dual purpose to Ease the Burden - Find the Cure for Parkinson’s disease. In that time, APDA has raised and invested more than $86 million to fund research, patient services and education, and elevate public awareness. As the country’s largest Parkinson’s grassroots organization, APDA is here to serve the more than one million Americans with Parkinson’s disease and their families through a nationwide network of Chapters, Information and Referral (I&R) Centers, and support groups. APDA also funds Centers for Advanced Research and awards grants to fund the most promising research toward discovering the cause(s) and finding the cure for Parkinson’s disease.