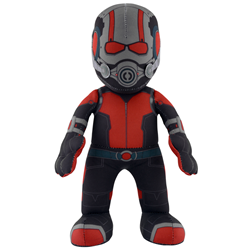 With Marvel’s Ant-Man, we’re delighted to produce our first plush that celebrates an oversized version of a miniature Super Hero!

If great things come in small packages, great Super Heroes can come in tiny form: Ant-Man, the smallest Super Hero in the Marvel universe, will make his feature-film debut on July 17—and Bleacher Creatures, the innovative licensing manufacturer, will have Ant-Man’s larger-than-life plush counterpart ready to greet him. At ten inches in height, the plush is 20 times taller than Ant-Man himself (while possessing a somewhat different skill set).

The Marvel’s Ant-Man plush will be available for pre-order on the Bleacher Creatures website (http://www.bleachercreatures.com) on June 1, and will debut in stores on June 17.

Marvel’s Ant-Man stars Paul Rudd as a con man who finds his inner Super Hero when he dons a suit that enables him to shrink in size but increase his strength.

Bleacher Creatures produces incredibly true-to life plush figures of some of the greatest sports and entertainment icons of all time. Their line of plush figures based on Marvel’s Avengers: Age of Ultron include Iron Man, Thor, Black Widow, Hawkeye, Nick Fury, and Captain America.

“We’re very excited to be working with the creative geniuses at Marvel as we transform Ant-Man into a charming yet faithful plush figure,” says Matthew Hoffman, founder and president of Bleacher Creatures. “Having created plush figures of sports icons, we’re used to producing remarkably faithful miniature versions of real-life heroes. With Marvel’s Ant-Man, we’re delighted to produce our first plush that celebrates an oversized version of a miniature Super Hero!”