Winning Personal Wars with a Paintbrush 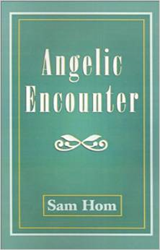 It’s important to embrace who you are and where you come from.

“I am not what happened to me. I am what I choose to become.”

In his fiction novel, “Angelic Encounter: A Flying Tiger Son’s Story,” Sam Hom tells the story of a young Asian-American boy named Ah-Seem who is adversely affected by the experiences of his immigrant parents amid and following WWII.

After realizing his true destiny to become an artist through an ancient Chinese legend about an angelic spirit of art, Ah-Seem learns to celebrate and redeem his PTSD- stricken war hero father through love and his paintbrush.

An accomplished artist, Hom channels his own childhood through Ah-Seem and his experiences as a Chinese-American living within his father’s post-war emotional trauma.

“This is the only story I know because I lived it,” Hom said. “The good, bad and the ugly.”

Similar to ABC’s new series “Fresh Off the Boat,” the first American television situation comedy starring an Asian-American family as protagonists to air on network primetime since 1994, Hom also aims to shine a light on Chinese culture.

“It’s important to embrace who you are and where you come from,” Hom said.

About the author
Sam Hom is a writer, painter and university professor. He has a bachelor’s and master’s degree in fine arts from San Francisco State University. He has spent more than 10 years a university-level instructor, and his paintings have been featured in many local and national museums. Hom has extensively studied Carl Jung’s psychoanalytic theories, and is a proponent of Jung’s view of art and the collective unconscious.