With a career spanning more than 40 years in healthcare administration, AHA President and CEO Rich Umbdenstock is being recognized by NCHL for bringing innovative thinking to the field,supporting and mentoring other healthcare leaders, and for his unwavering commitment to reduce costs and improve quality. 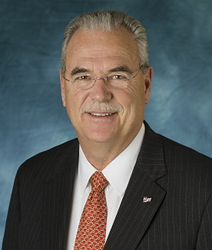 From his position as the head of the AHA, Rich Umbdenstock has shown unparalleled leadership in breaking through the divisive debate on health reform to help drive change and improvement in the nation’s healthcare system

The National Center for Healthcare Leadership (NCHL), a not-for-profit that works to improve population health by enhancing the capacity of healthcare leaders, is pleased to announce that American Hospital Association (AHA) President and Chief Executive Officer Rich Umbdenstock has been named the recipient of its 2015 Gail L. Warden Leadership Excellence Award. Mr. Umbdenstock, who has led the AHA for nine years, is being recognized for his tireless work to transform and improve healthcare with a commitment to ensuring that every patient has access to the right care at the right time in the right setting.

“From his position as the head of the AHA, Rich Umbdenstock has shown unparalleled leadership in breaking through the divisive debate on health reform to help drive change and improvement in the nation’s healthcare system,” NCHL President and Board Chair Tim Rice said. “His leadership and innovative thinking span all aspects of the healthcare system, addressing such vital issues as quality and cost, advancing diversity in healthcare leadership, promoting the role of hospitals as an effective advocate for patients and their communities, and creating a healthcare system that envisions a nation of healthy communities. Rich’s leadership—from his role as a hospital system CEO to CEO of the AHA—has resulted in important and lasting changes to the field. NCHL is honored to recognize his achievements.”

Mr. Umbdenstock joined the AHA in 2006 as president-elect and was named president and CEO the following year. From 1993 through 2006, he was an executive with Providence Services in Spokane, and then Providence Health & Services in Seattle with facilities in Washington, Alaska, Montana, Oregon, and California, consisting of 27 acute-care hospitals, 35 long-term-care facilities, other healthcare and educational organizations. Prior to that Mr. Umbdenstock worked as a consultant in hospital governance. Early in his career he worked as a special assistant to the president of the AHA. Mr. Umbdenstock earned his Master of Science in Health Services Administration from State University of New York at Stony Brook and his Bachelor of Arts from Fairfield University.

Mr. Umbdenstock is the recipient of numerous honors and awards including Honorary Member Award from the American Organization of Nurse Executives (2015), Gold Medal Award from the American College of Healthcare Executives (2015), Health Care Leadership Award (Inaugural) Federation of American Hospitals (2015), and the B’nai B’rith National Healthcare Award (2014). He has been named by Modern Healthcare as one of healthcare’s most influential people every year since 2008 and in 2003 Gonzaga University presented him with an honorary Doctor of Laws. He has been on the Board of Directors of the National Quality Forum since 2007, serving as vice chair from 2013 to 2015. He is also on the Board of Enroll America, and co-chair of CAQH Provider Council.

Mr. Umbdenstock will be honored on Tuesday, November 17, 2015 at the Leadership Award dinner at the Sofitel Hotel, Chicago. This celebration, which brings together healthcare’s luminaries and notable leaders from the nation’s prominent health sector, academic, and research organizations, will be held in conjunction with NCHL’s annual Human Capital Investment Conference, “Leading Together, Shaping the Future.” At the conference, NCHL will introduce the winners of its “Leading Together” challenge, which is seeking to identify, recognize, and share programs that enhance leadership competencies and skills across sectors to improve population health.

ABOUT THE GAIL L. WARDEN LEADERSHIP EXCELLENCE AWARD
The Gail L. Warden Leadership Excellence Award of the National Center for Healthcare Leadership is awarded annually to an individual who has made significant contributions to the health field, including the mentoring of future leaders towards the goal of transforming organizational performance and improving health and healthcare in the U.S. It is named for Gail L. Warden, founding chairman of the NCHL Board, Chairman Emeritus of Henry Ford Health System, and one of healthcare’s foremost leaders. The NCHL leadership award was established in 2005.

ABOUT THE NATIONAL CENTER FOR HEALTHCARE LEADERSHIP
The National Center for Healthcare Leadership (NCHL) is a not-for-profit organization that is an industry catalyst to ensure the availability of accountable and transformational healthcare leadership for the 21st century. Its vision is to improve population health through leadership and organizational excellence. For more information please visit NCHL’s website at http://www.nchl.org